W is for: What We Do In The Shadows 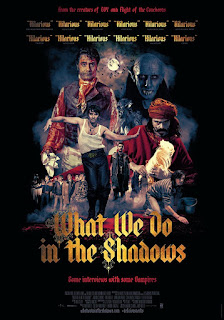 Long-time friends and collaborators, Taika Waititi and Jemaine Clement have a ball in this outrageous mockumentary about vampire flatmates in Wellington.

Simple things like chores become a bigger deal when you’re immortal, and a bad flatmate isn’t just for a few months, but eternity. The central character is the film is Waititi’s Viago, a 369 year-old vampire who is the centre of the household in suburban Wellington.

Life gets turned upside-down when fledgling vampire, Nick, joins them in the flat. With Nick comes his human friend, Stu. The group has never had a human in the house, but agree that he is off-limits for snacking. Nick revels in his new status as vampire and shouts it out to everyone he knows, much to the consternation of the ones who prefer to lurk in the shadows…

This is a very funny film and one that has been very successful both in New Zealand and overseas. With vampire fatigue being a very real thing, it's nice to see an addition to the genre that doesn't take itself too seriously and considers the various downsides of immortality.  And did I mention the super-polite werewolves?  They're werewolves, not swearwolves....
Posted by Kate Larkindale at 12:36 AM