V is for: Vigil 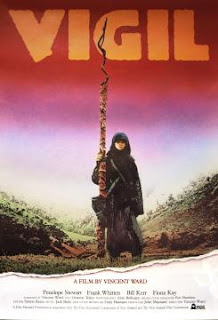 There is little dialogue in Vigil, giving the performers a presence reminiscent of those in silent films. Set on a remote sheep farm, the film explores the psyche of, Toss, a 12-year-old girl, in the aftermath of her father’s death. As her mother becomes involved with another man, Toss struggles to understand the strange new feelings swamping her.

This is one of the darkest coming-of-age stories ever told, the lines between sex and death blurred to a point they are barely recognizable. Stark cinematography captures the bleakness of the landscape that perfectly matches the fractured psyches of its inhabitants. Yet at the same time, the film has its own unique beauty, a kind of blasted poetry that will leave viewers rocked to the core.

When I first saw this film, I was too young to fully understand or appreciate it.  I thought the landscapes were beautiful, but the themes and layers were beyond me and I was unused to films that told their stories in a wholly visual way.  Definitely a lesson to be learned there, that just because a film has a child protagonist, doesn't make it a suitable film for children.  Coming back to it as an adult was a wonderful experience, and I would now list this as one of my favorite kiwi films.
Posted by Kate Larkindale at 12:33 AM