C is for: Crush 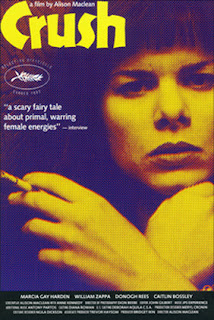 This is a steamy film, from the bubbling mud-pools of Rotorua to the ambiguous sexual tensions simmering beneath every relationship portrayed. Christina is a literary critic travelling with an American friend to interview a reclusive award winning author. The relationship between the pair is ambiguous.


Lane takes the wheel of the car and manages to crash, seriously injuring her friend while she walks away with little more than a scratch. Leaving Christina in the hospital, Lane continues on to the author, but meets his daughter first and takes her out for a wild night after which she seduces the youngster.

When the author discovers his little girl in bed with Lane, he’s initially crushed, but it isn’t long before Lane moves into his bed.

The title, Crush, is apt. Everyone has a crush on Lane, and she is excellent at crushing anyone who doesn’t help her get what she wants. But what that is, we can’t be sure.

This film was my introduction to Marcia Gay Harden and she has been one of my favorite actors ever since, especially in Mystic River where she plays a character about as far away from Lane as she could possibly get.

This is the last film Alison Maclean made in New Zealand before moving overseas to work.  She returned to New Zealand recently to make The Rehearsal, based on the novel by Booker Prize winning novelist Eleanor Catton.
Posted by Kate Larkindale at 12:30 AM