Yes, it's Easter and we have a 4-day weekend.  Or at least, I do.  The kids have 5 days, the lucky so and sos.  But my partner is working right through, so I guess it balances out.

The good thing is he's working at an outdoor music festival on the coast, so we're all going along.  It's going to be an adventure, especially since it will be the first time we've been camping since summer 2000.  Amazingly all our camping equipment seems to have survived and the extra stuff we need for two extra people we've managed to borrow.  So now we just need to keep our fingers crossed for fine weather for the whole 3 days.

It's going to be very basic - no electricity (except to power the stages for the music), no showers and no cellphone coverage.  I'm taking a pile of books, some sunblock, my swim suit and a couple of bottles of wine.  It's going to be lovely!

What are you celebrating this Easter weekend? 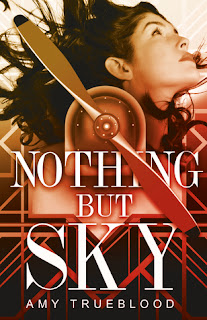 After one of her risky maneuvers saves a pilot’s life, a Hollywood studio offers Grace a chance to perform at the Expo. She jumps at the opportunity to secure her future. But when a stunt goes wrong, Grace must decide whether Henry, and her life, are worth risking for one final trick.
Posted by Kate Larkindale at 12:30 AM 2 comments:

I got some writing done over the weekend, and am nw well over the halfway mark on my story.  I still have some of the middle part to fill in, but feel like I'm definitely on the way to finishing. Unfortunately, this is another week where I know I'm not going to get much done.  I may be scrabbling to hit the deadline for this anthology!

It's a short week, so it will be busy at work.  Plus I have to find the time to get everything organised for the weekend away.  I woke up in the middle of the night to the realization that because Friday is Good Friday, the supermarkets will be closed, so I can't even shop for food on the way up to the site.  I will have to do it all the night before.

What are your goals this week?
Posted by Kate Larkindale at 10:12 AM 3 comments:

It has been a long, frustrating week at work so I am looking forward to the weekend.  I was going to have to go to Auckland to work at an event all weekend, but at the last minute our plans changed, so I don't have to go after all.  Which is wonderful because I really feel like I need a weekend.

Especially since next weekend is Easter and we're supposed be going to an three-day music festival where we need to camp.  I haven't been camping for about 17 years, so I need some time to figure out what we need, and where we can borrow it.  Hopefully the weather forecast is better for th elong weekend than it is for this weekend....  If it's going to be terrible, I think I'll let my partner who's working at the festival, go alone.

I managed some writing this week. Not a whole lot, but my story is beginning to take shape.  I just need to write the middle now.  I have the beginning and the end.  The weekend will be a good time to do this.

My pub quiz team finally got orgnanised to go back to our favourite quiz on Wednesday night for the first time in 2018, and we came second.  By one point. Not a bad way to kick off the season, eh?

What are you celebrating this week?
Posted by Kate Larkindale at 10:28 AM 3 comments: