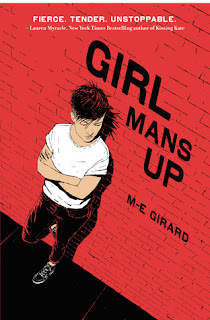 Pen is the daughter of Portuguese immigrants now living in Canada.  They don't understand why she wants to dress in boys' clothes and cut her hair short.  In fact, they don't understand anything about her or her older brother who lives in the basement.  But they never seem to try either, just demand the kids to obey the rules and respect them without actually ever trying to earn their respect.

I didn't like this parent-child relationship at all.  I know some parents are harsh, especially immigrants who struggle with cultural differences as well as the usual generational ones, but this seemed borderline abusive.

So is Pen's friendship with Colby, the guy a few doors down.  She and Colby and a couple of other guys have been friends forever and Colby has been using Pen as a wingman since he was old enough to be interested in girls.  But Colby is a bit of a dick and I found myself cheering when things started going badly for him, and cheering even louder when Pen figures out what a douche he is and walks away from the friendship.

Blake, the girl Pen lusts after from afar, then gets to hang out with, is another badass female character.  She's a gamer whose unashamed of her skill and will take down male gamers without a qualm.  While her relationship with Pen happens quickly, it feels like a realistic sliding into love between two girls who like the same things.

I really enjoyed the way this book explored gender idenity, friendship and parental relationships, even if I found some of the relationships to be toxic and a little over the top.

All Pen wants is to be the kind of girl she’s always been. So why does everyone have a problem with it? They think the way she looks and acts means she’s trying to be a boy—that she should quit trying to be something she’s not. If she dresses like a girl, and does what her folks want, it will show respect. If she takes orders and does what her friend Colby wants, it will show her loyalty. But respect and loyalty, Pen discovers, are empty words. Old-world parents, disintegrating friendships, and strong feelings for other girls drive Pen to see the truth--that in order to be who she truly wants to be, she’ll have to man up.
Posted by Kate Larkindale at 10:40 AM