Can you believe it's the last day of April already?  Where is the year going?

Luckily I have a very clear idea what needs to be done on each, so once I make that decision, I should be able to do the work relatively quickly and painlessly.  Famous last words, eh?

At work, things should calm down somewhat after today, so my aim there is to get all the little things I've been putting off because I was too busy, completed.  Lots of those tasks are really boring, but they need to be done regardless.

I finished my story for the anthology and have sent it off.  I don't think it's my best story, but it's certainly better now than it was on Tuesday, before I got feedback from one of my crit partners.  I spent Wednesday (a public holiday here) implementing her feedback and feel like I have a much better story now.  Yay for crit partners!

It has been a busy week at work and I am looking forward to the weekend - even with having had a day off in the middle of the week.  We have a big event on Monday and it has been a lot of work already.  I can't wait for it to be over.  Maybe then I'll actually make it to the gym in my lunchbreaks as I've planned to. 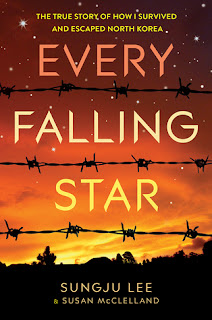 
Every Falling Star, the first book to portray contemporary North Korea to a young audience, is the intense memoir of a North Korean boy named Sungju who is forced at age twelve to live on the streets and fend for himself. To survive, Sungju creates a gang and lives by thieving, fighting, begging, and stealing rides on cargo trains. Sungju richly re-creates his scabrous story, depicting what it was like for a boy alone to create a new family with his gang, his “brothers”; to be hungry and to fear arrest, imprisonment, and even execution. This riveting memoir allows young readers to learn about other cultures where freedoms they take for granted do not exist.
Posted by Kate Larkindale at 11:44 AM 1 comment:

My goals are all about revision this week.  Somehow the weekend managed to fly by without me finding any time to work on my story, so I have to really knuckle down and get the thing finished.  Luckily Wednesday is a public holiday, so I'm hoping I will get a few solid hours then in which I can work.

Other than that, I'm still determined to make it to the gym more often, so I'm aiming for four times this week.

What are your goals for this week?
Posted by Kate Larkindale at 11:09 AM 2 comments:

It's Friday!  And yes, I realize I celebrate that fact every week.  This week I'm just celebrating harder than usual because it's been a long, busy week and I'm looking forward to the weekend.  Plus, there's a public holiday in the middle of next week, so something to look forward to for next week.

I finished my story for the anthology and even have 4500 words to spare.  Plus, in an added bonus, they've moved the deadline by a week, so I have until next Friday to revise.  So I am in the throes of revision right now and grateful I have a few words up my sleeve because I think I will need them.

I used to loathe revising, but over the years, I have learned to love it.  I might even venture to say I enjoy it more than writing new drafts these days.  I know!  I never thought I'd ever say that.

I also met my goal of going to the gym during the week more.  I have been three times already this week, and intend to go at lunchtime again today.

What are you celebrating this week?
Posted by Kate Larkindale at 11:21 AM 4 comments: