Yesterday was my last day at work.  It was a weird feeling because I went in, and to begin with, it was just like any other Monday.  I sent off the weekend figures, made a change order, looked at the numbers of people who went to each film and wrote a schedule for the new week.  I wrote a staff roster.

And once that was done, I really couldn't see any point in staying any longer.

Saying goodbye to the staff was always going to be the hard part, but I'd done most of that on Sunday night.  Saying goodbye to my projectionist was the hardest of all.  We've been through so much together, and she has been the most fantastic team-mate in the world.  I know I'll still see her, and all the staff, but it won't be the same.

I thought I'd be able to make it out the doors without crying, but as soon as I stepped outside, I walked right into one of the local reviewers I've worked very closely with over the years, and I burst into tears.

It feels surreal.  I don't think it's fully sunk in.  I keep thinking of things I forgot to do yesterday, then realize it's not my problem anymore.  I don't think it's going to feel real until it's been a few days and I haven't been in.  And I don't know if I'll ever feel comfortable going back there.  It's been a second home to me for over 8 years, yet I feel right now like I can't walk through the doors again.

Have you ever been in a situation like this?  How did you deal with it?
Posted by Kate Larkindale at 11:14 AM 3 comments:

I have to say, finding things to celebrate this week has been a challenge...  If you've been following my blog you'll know that last week I was made redundant from a job I've been doing for over 8 years.  A job I love and have put everything I can into.  So knowing Monday is my last day, isn't making me feel terribly celebratory.

But the response I've had to the news has been incredible.  My customers have been sending the most lovely emails to say goodbye.  Everyone in the industry has been calling to tell me how well liked and respected I am and how much they will miss working with me.  I've had so many offers for references I could fill my resume just with names of people who want to say nice things about me.  It's been a little overwhelming, but it's made me feel so much better.  So if you're one of the people who has done this, let it be known how grateful I am for it...

So that's what I'll celebrate this week.  That one ray of sunshine beaming through the bleak uncertainty that is my future.

What are you celebrating this week?
Posted by Kate Larkindale at 9:53 PM 8 comments:

As I mentioned in my last post, I got a publishing contract last week.  I should be jumping rainbows and over the moon about it, but the same day I signed the contract, I lost my job.

So my celebrating has been muted.  I'm still thrilled that The Boyfriend Plague has found a home and will eventually be out there for the world to read.  I'm excited about going through the editorial process and learning how best to market my work so it finds its way to the readers who will most enjoy it.

But at the same time, there is a lot of uncertainty about my future.  The business I've been running for over 8 years has been sold and my services are no longer required.  I'm trying to be unemotional about it, but it's difficult.  I've put so much of myself into the business and I love the people I work with.  I love my regular customers and the people who bring their events and functions to me every year.

I foresee a busy few months ahead as I try to find work at the same time as trying to get my book ready to go out into the world...  But first I have to get through one last week at the cinema and having to say goodbye.

Do you ever think whoever's running the joint has a really sick sense of humor?
Posted by Kate Larkindale at 2:44 AM 14 comments:

Actually, it's kind of a big thing.  I signed a publishing contract for one of my books!

Yes, The Boyfriend Plague has been picked up by Musa Publishing and will hopefully be available by the end of the year!

I don't think anything else in my week can top that, so what are you celebrating this week?
Posted by Kate Larkindale at 11:29 AM 17 comments:

It must be that time of year or something, but suddenly so many of my friends in the writing community have new books coming out and are letting me be a part of their cover reveals.  This time it's the lovely and very talented Jessa Russo's turn.  A few weeks ago I had the privilege of revealing the cover for the re-release of the first book in this series, EVER.  Now it's the turn of the brand new sequel, EVADE.

Check out how beautiful it is... 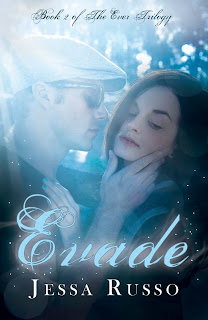 In this thrilling sequel, Ever Van Ruysdael's race to beat the odds—and the clock—begins with the introduction of an integral part of her past. As secrets are revealed, and truths uncovered, she learns her imminent death is the least of her problems: Ariadne did more than just put an expiration date on her life; she marked Ever's soul by upping its value for greedy collectors looking to buy their freedom.

Condemned by the countdown on her life, and hunted by hired Seekers, Ever’s journey leads her to question everything she’s known and everyone she’s trusted, while growing closer to the one person from her past she was determined to avoid—and the one guy she never could—Toby James.

With her ex-boyfriend by her side, and the countdown clock rapidly ticking away, Ever tries thwarting fate’s plans. But as her nineteenth birthday approaches, and desperate Seekers follow her every move, she may be too late.

GRAB A COPY OF EVER: Book One of The EVER Trilogy!
Amazon | Kobo | Barnes & Noble | Goodreads

Cover Reveal : The Summer I Found You

I'm so excited to be able to give you a sneak peek at the brand new cover for my friend Jolene Perry's new book.  It's not out until the 1st March 2014, so make sure you make a note of that if this sounds like something you'd want to read.  I know I want to!  I'm such a huge fan of Jolene's books, and so in awe of the speed she manages to write them.  But that's good, because I never have to wait too long before there's a new one to dive into.

So take a look at this gorgeous cover...  Then read on to find out what's behind it. 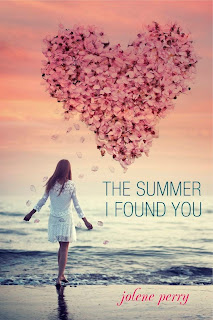 Kate's dream boyfriend has just broken up with her and she's still reeling from her diagnosis of type 1 diabetes.Aidan planned on being a 'lifer' in the army and went to Iraq straight out of high school. Now he's a disabled young veteran struggling to embrace his new life.When Kate and Aidan find each other neither one wants to get attached. But could they be right for each other after all?

@authorjolene
www.jolenesbeenwriting.blogspot.com
Posted by Kate Larkindale at 2:44 AM No comments:

It's Friday the 13th and right now I'm about 45 minutes from midnight, and so far, nothing tragic or horrific has happened to me.  Unless you count sitting through Saturday Night Fever....  I think I must have blocked out how horribly misogynistic that film is.  I certainly don't remember it being so awful and plotless and just plain bad.  About the only good thing you can say is that John Travolta can dance, and he's not bad to look at...

I made it into the agent round of Pitch Madness which was a huge surprise.  I got a couple of requests out of it too, which has had me smiling for the last couple of days.

I also got resurrected after being voted out of my bout in Write Club.  The nice people voting voted me back in, and then  I won my first round in the playoffs.  Or at least, I think I have.  Voting doesn't close until Sunday, but at the moment I'm ahead.  This makes me all kinds of happy!

What are you celebrating this week