I had a a really weird week this week.  Part of it was wonderful because I had my two good friends from Berlin here and it was so much fun to see them and show them around for a couple of days.  And part of it was horrible because things at work are quite tense at the moment and navigating various people and situations has been challenging.

I'm glad it's the weekend and I can spend a couple of days relaxing and getting my head together.

I also started a new book this week.  I didn't mean to, but somehow the story that's been brewing in my head demanded to come out, so I started writing.  And to keep myself disciplined and on track with this, I've decided to use the daily writing prompts on WDC to inform and spark each day's 1000 word or less chapter.

This book is deamanding to be told in an epistorial style, so by using the prompts, I'm writing one diary entry for my MC per day, and in about 40 days or so, I hope to have the bones of the story written.

We shall see if it works...  And in between, I need to edit the last 2 chapters of my older book.  Hopefully I can get that done in the next couple of weeks because we're getting close to the film festival and that's always the craziest time of my year.  So I'd like to be done editing before it starts...

Posted by Kate Larkindale at 2:12 AM 4 comments:

Books I've Loved: How to Disappear 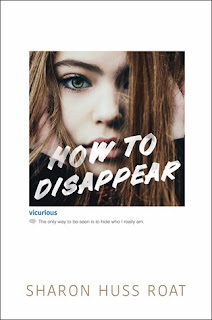 This book took me by surprise and I enjoyed it immensely.  I realized as I read it, a lot of girls in YA novels claim to be shy, or call themselves shy in their internal monlogue, but very few actually present themselves as actually shy on the page.

Vicky, the MC in this book is definitely shy.  Just being around people is enough to make her anxious.   She's always managed her shyness and social anxiety by hiding behind her friend, Jenna.  But when Jenna moves away, Vicky has nothing left to hide behind.

Vicky's mother worries about her shyness and how much time she's alone.  Partly to ease her mother's fears, and partly to show Jenna that she can have a life without her, Vicky starts Photoshopping herself into other people's pictures and posting them on Instagram.

It doesn't take long for Vicky's posts, under the name Vicurious, to go viral. And as more people follow the imaginary life Vicky has created from the safety and security of her bedroom, the more Vicky realizes she's not alone in feeling isolated and afraid.

Unlike most books about social media, this one doesn't vilify it.  Vicky's online presence is shown to be a good thing, and as she learns more about her followers, Vicky reaches out and encourages those followers to help one another.  In this case, the faceless mass is mobilized to do good, not evil, and brings about positive change not just for Vicky, but to many others.  While she starts the account for herself, and maybe a little for Jenna, Vicky ends up creating a community.

It also shows how using this medium empowers Vicky.  Only through hiding behind an avatar does Vicky learn about her own strengths and discover she does have something to offer the world.  And maybe even the cute guy who passes notes to her in history class...

This is a thoroughly contemporary story and it has some really important things to say about social media when it truly is used as a tool for connecting people.  As someone who is increasingly frustrated and bored by social media, this book gave a refreshing perspective.  Definitely recommended.

Vicky Decker has perfected the art of hiding in plain sight, quietly navigating the halls of her high school undetected except by her best (and only) friend, Jenna. But when Jenna moves away, Vicky’s isolation becomes unbearable.

So she decides to invent a social life by Photoshopping herself into other people’s pictures, posting them on Instagram under the screen name Vicurious. Instantly, she begins to get followers, so she adds herself to more photos from all over the world with all types of people. And as Vicurious’s online followers multiply, Vicky realizes she can make a whole life for herself without ever leaving her bedroom. But the more followers she finds online, the clearer it becomes that there are a lot of people out there who feel like her— #alone and #ignored in real life.

To help them, and herself, Vicky must find the courage to face her fear of being “seen,” because only then can she stop living vicariously and truly bring the magic of Vicurious to life.

As I suspected, last week wasn't a great writing week, and I suspect this week won't be much better.  I did get through the four chapters of editing I was aiming for, but I had hoped to do a little more.

So this week, I'm aiming for another four chapters, but I have a feeling that might be a stretch.  We'll see...  There's only six left to go, but I know this is where I need to do some serious re-writing and adding and changing.

And once that's done, I'll need to do another pass through to make sure the new stuff I added at the end fits with what comes before it.

This editing stuff never ends, does it?
Posted by Kate Larkindale at 11:17 AM 2 comments:

My good friends from Berlin are touring in New Zealand for the first time and they arrive in Wellington tomorrow.  I'm looking forward to catching up with them, seeing them play and showing them around my hometown.

My younger son turned 11 yesterday, so tonight I have all his friends coming for a sleepover.  We're taking them to have sushi for dinner, then to see the new Jurrassic World movie before coming back here for cake and shennannigans.