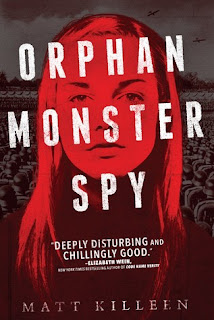 I know...  This really doesn't look like the kind of book I'd usually enjoy, but I loved it.  It's fast-paced, has a kick-ass heroine and, even better, it's based on a true story.  I whipped through it and was highly disappointed when I finished because it was so much fun to read.

Sarah is a Jew in Germany during the war.  She's blonde, blue-eyed and looks much younger than her fifteen years.  In a daring yet misguided escape attempt, Sarah's mother is shot at a checkpoint, leaving Sarah alone and on the run.   When she meets a mysterious stranger and saves his life, her own life takes a startling new turn.

The man is a spy and he's frustrated because he can't pull off the mission he's supposed to.  But after seeing Sarah in action, he realizes she might just be his ticket into the highly-secure compound.  So he sets Sarah up in a Nazi boarding school under the guise of being his abandoned niece, and lets Sarah go to work on befriending the scientist's daughter.

I think what I loved the most about this book was how quirky and interesting Sarah is.  She's been brought up by an eccetric mother who worked in the theatre and taught a range of skills that may not be terribly useful in everyday life, but are fantastic for a spy.  She's also strangely unemotional at times, able to pack the horrors she's seen and experienced away deep down until she has time to deal with them.  This makes her unusually clear-headed and quick-thinking, even at times of great stress.

The other thing I loved was how exciting the adventure became, how perilous and dangerous Sarah's situation became the closer she got to her prey.  There were also some unexpected twists that just made the story even better, even if they were disturbing.

I've been recommending this one to everyone this week because I enjoyed it so much.  So if you like your heroines tough, brave and definitely unlike a typical 15-year-old, this one is for you.

After her mother is shot at a checkpoint, fifteen-year-old Sarah--blonde, blue-eyed, and Jewish--finds herself on the run from a government that wants to see every person like her dead. Then Sarah meets a mysterious man with an ambiguous accent, a suspiciously bare apartment, and a lockbox full of weapons. He's a spy, and he needs Sarah to become one, too, to pull off a mission he can't attempt on his own: infiltrate a boarding school attended by the daughters of top Nazi brass, befriend the daughter of a key scientist, and steal the blueprints to a bomb that could destroy the cities of Western Europe. With years of training from her actress mother in the art of impersonation, Sarah thinks she's ready. But nothing prepares her for her cutthroat schoolmates, and soon she finds herself in a battle for survival unlike any she'd ever imagined.
Posted by Kate Larkindale at 11:31 AM