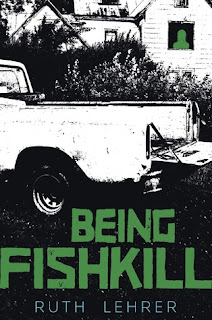 I was surpised at how much I enjoyed this book, given how young the protagonist is.  But Fishkill isn't your average middle-grader, and this is definitely not a middle-grade book, despite the main character being only twelve.

Being Fishkill offers a starkly realistic portrait of what it is like to live in poverty in modern America.    It also offers a glimmer of hope as Fishkill finds a friend, and with her, a new kind of family.

Fishkill is a strong, painfully realistic character who refuses to to take crap from anyone.  Whether she's getting what she needs with her fists or her cunning, she refuses to just lie down and die.  She refuses to believe her life is going to continue to be as difficult and deprived as it has been in the past.

And then she makes a new friend in Duck-Duck.  Duck-Duck pretends to be tough, but has all the advantages Fishkill doesn't - a mother who cares, a warm house, food on the table.  Fishkill loves being friends with Duck-Duck, partly for her imagination and daring, but partly also for the food and a chance to be in a real home for a period of time.

When Duck-Duck's mother starts asking too many probing questions, Fishkill is forced to admit the truth, something that leads to something resembling a stable family life, if unconventional.  For a short time, Fishkill starts to dare dream her life might turn out better than she imagined possible.  But when her unstable mother returns unexpectedly, she brings chaos and tragedy with her, and nothing in Fishkill's life will ever be the same.

This is a strking, tragic book that deals with some difficult subject matter.  Fishkill is an endearing protagonist and the author manages to keep everything firmly in her worldview, leaving out the things a girl her age wouldn't notice or understand.  I particularly liked the tentative way Fishkill and Duck-Duck began exploring their sexuality without it even being remarked on in any real way because at that age, they wouldn't have recognized that's what they were doing.

It isn't always an easy read in that the subject matter is difficult, but if you're feeling strong and have a few tissues handy, I definitely recommend this one.

Fishkill Carmel fends for herself, with her fists if need be — until a thwarted lunch theft introduces her to strange, sunny Duck-Duck and a chance for a new start.

Born in the backseat of a moving car, Carmel Fishkill was unceremoniously pushed into a world that refuses to offer her security, stability, love. At age thirteen, she begins to fight back. Carmel Fishkill becomes Fishkill Carmel, who deflects her tormenters with a strong left hook and conceals her secrets from teachers and social workers. But Fishkill’s fierce defenses falter when she meets eccentric optimist Duck-Duck Farina, and soon they, along with Duck-Duck’s mother, Molly, form a tentative family, even as Fishkill struggles to understand her place in it. This fragile new beginning is threatened by the reappearance of Fishkill’s unstable mother — and by unfathomable tragedy. Poet Ruth Lehrer’s young adult debut is a stunning, revelatory look at what defines and sustains “family.” And, just as it does for Fishkill, meeting Duck-Duck Farina and her mother will leave readers forever changed.
Posted by Kate Larkindale at 9:36 AM 3 comments:

I have just about tied up all the little things that were hanging over me from last year, so this week my goal is to get writing again.

I have a book that I wrote in dual POV, and several agents have requested it, but they all came back saying they felt one character was more interesting and compelling than the other, and that they felt the book should be his story.

So my first project this year is to rewrite this book into a single POV. It will be an interesting exercise because the action can remain the same in the chapters that were in Amy's POV, just how they are experienced will be different.  I think it will also be a good way to cut the word count a little too...  I can already think of at least two chapters that can be entirely cut if I'm going to switch the POV.

So my goal this week is to get through rewriting four chapters.  If I can do five, even better, but I want to keep my goals realistic so I don't feel like a failure.  I would like to have finished this re-writing project by early March so I can move on to something new.

What are your goals this week?
Posted by Kate Larkindale at 9:33 AM 1 comment:

Right now I'm celebrating not sweating.  It's been really hot here this week (and last week), and we're just not prepared for that in Wellington.  There's no air-con in my office and in the afternoons when the sun shines in through the windows, it's a little like being in a convection oven.  And at home, even though we have lots of airflow through the house, it's still hot air which makes for uncomfortable and sleepless nights.

But today, the wind has changed and the termperature has dropped to a much more pleasant level.  I don't think it's going to last long, but I'll enjoy it while I can.

School starts on Monday for my older son.  I can't quite get my head around the fact he's going to high school!  The younger one still has another week of vacation, so I will have to find some activities for him that will get him primed and ready for school.

What are you celebrating this week?
Posted by Kate Larkindale at 9:33 AM 2 comments:

Books I've Loved: Now is Everything 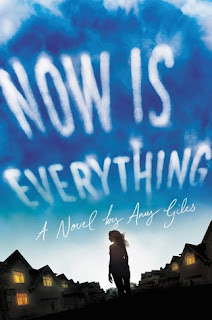 I knew nothing about this book when I picked up, but the blurb intrigued me so I decided to give it a go.  And boy am I glad I did!

The book takes place after a plane crash in which it appears Hadley is the sole survivor.  Through a series of flashbacks as she works through how she came to be there, Hadley's world comes into view.  Her ineffectual mother who drinks to escape reality.  Her overbearing bully of a father.  Her much loved little sister who Hadley will do anything to protect from living the life she has been forced to endure.

Outwardly this is a wealthy, privileged family and Hadley is not only a perfect student, but also a star athlete.  At least, that's what Charlie Simmons sees when he first meets her.  As they fall deeper and deeper in love, the cracks in Hadley's perfect life begin to show.  And she becomes increasingly reckless in defying her family in order to keep seeing the boy she loves.

This book highlights how broken families can be behind closed doors, and how much people are willing to suffer for those they care about.  It also shows what can happen when someone gets pushed one step too far...

Intriguing right up to the final page, I highly recommend this one.

The McCauleys look perfect on the outside. But nothing is ever as it seems, and this family is hiding a dark secret.

Hadley McCauley will do anything to keep her sister safe from their father. But when Hadley’s forbidden relationship with Charlie Simmons deepens, the violence at home escalates, culminating in an explosive accident that will leave everyone changed.

When Hadley attempts to take her own life at the hospital post-accident, her friends, doctors, family, and the investigator on the case want to know why. Only Hadley knows what really happened that day, and she’s not talking.
Posted by Kate Larkindale at 9:47 AM 1 comment:

I've almost caught up on everything I needed to do after being away on holiday, so this week is going to be about deciding what to work on first this year.

I have several things I want to do, so I need to figure out which is the best one to work on first.

And of course, I still have a few little things to tie up from while I was away.  So they need to be done first.  I don't want to dive into something new while there are still dangling threads and loose ends of other things hanging over me.  That's just a recipe for distraction.

What are your goals this week?
Posted by Kate Larkindale at 10:26 AM 2 comments:

The end of my first week back at work.  Damn, did it feel long!  Luckily it's a long weekend, so I have an extra day to recover...

I've had a child-free week (they get back tomorrow), so it's been a chance to spend time with my partner and do things we don't usually get to do together.  We've been out to dinner and to the movies and haven't been eating dinner until after 7pm.

Tonight he's working, but it's an outdoor gig in the Botanic Gardens, so I'll go along with him and enjoy the music.  My best friend is performing and it has been far too long since I've seen her.

Then tomorrow the kids get back and things will begin to get back to normal. Although, one of them still has two more weeks off school...

What are you celebrating this week?
Posted by Kate Larkindale at 9:51 AM 3 comments: