I sent my first round of edits on STUMPED to my publisher.  They had asked for one scene to be slightly truncated, and for some of the language to be toned down a little.  Hopefully I have managed that without losing anything important.

I'm going away on a work trip this weekend, so no rest for the wicked this week!  I'm very glad I had one day this week where I worked from home because otherwise it would feel like 12 days straight without a break.  In fact, hopefully I can have a work from home next week too.  It's still work, but slightly less manic than being in the office and having questions and work and requests thrown at you constantly.

What are you celebrating this week?
Posted by Kate Larkindale at 10:25 AM 1 comment:

Books I've Loved: How To Make A Wish 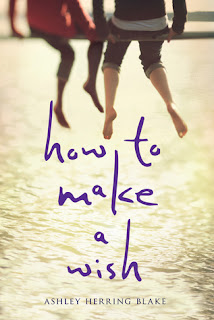 I loved this one despite a few elements that felt a little well worn.

Grace is a talented pianist who comes home from a two-week intensive to discover her mother has shacked up with a new man and Grace is now expected to live under the same roof as her ex, the man's son.  This is not the first, or even the third time Grace has had her life uprooted this way.  Her mother is capricious to say the least.

Luckily, Grace has a best friend who looks out for her, and he has a mother who would take her in any time Maggie's shennanigans go to far.  In fact, she has done just that, and it has led to friction between two the two parents.

But everything changes when Eva arrives in town.  Grief-stricken after losing her own mother, Eva tries to find a place for herself in her new world.  When she admits to Grace she likes girls, the pair embark on a relationship that changes everything for Grace.

While the unstable mother who needs taking care of by the dutiful daughter has become something of a trope, it worked here.  Grace's relationship with Eva felt natural and necessary and I enjoyed the way the pair helped each other through their various troubles.  The different relationships between mothers and kids were interesting too, and I very much liked the casual way Grace and her friends accepted and even embraced her bisexuality.

I would definitely recommend this one!

All seventeen year-old Grace Glasser wants is her own life. A normal life in which she sleeps in the same bed for longer than three months and doesn't have to scrounge for spare change to make sure the electric bill is paid. Emotionally trapped by her unreliable mother, Maggie, and the tiny cape on which she lives, she focuses on her best friend, her upcoming audition for a top music school in New York, and surviving Maggie’s latest boyfriend—who happens to be Grace’s own ex-boyfriend’s father.

Her attempts to lay low until she graduates are disrupted when she meets Eva, a girl with her own share of ghosts she’s trying to outrun. Grief-stricken and lonely, Eva pulls Grace into midnight adventures and feelings Grace never planned on. When Eva tells Grace she likes girls, both of their worlds open up. But, united by loss, Eva also shares a connection with Maggie. As Grace's mother spirals downward, both girls must figure out how to love and how to move on.
Posted by Kate Larkindale at 10:31 AM 1 comment:

As I mentioned on Friday, I just signed a new publishing contract, so have some edits to do on the book that will be coming out in November.  So my goal this week is to get through those edits.  I'm 22 chapters in now, and the book is 40 chapters plus an epilogue, so I have a little way to go yet.

Plus, I have the biggest change to make yet to come.

But, I'm confident I can do it.  I kind of have to.  I don't get a weekend at the end of this week because there is a big film industry event in Auckland over the weekend, and I have to be there as part of my day job.

What are your goals for the week?
Posted by Kate Larkindale at 10:23 AM 4 comments:

Yes, I signed a contract with my publisher for STUMPED and it looks like it will be out in November.

STUMPED is my favorite of all my books, so I'm extremely excited to be able to get it out into the world.  And more than a little nervous too...  It's challenging subject matter and certainly not a book for everyone.

So I'm busy working on edits right now.  When I'm done with them, I will get back to the revising I was already doing.

What are you celebrating this week?
Posted by Kate Larkindale at 11:28 AM 3 comments: