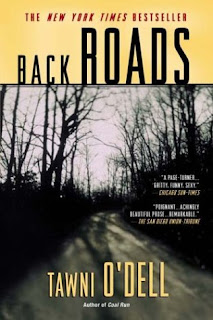 With being sick, I haven't been able to get to the library and have been forced to re-read books on my shelves at home.  Which is not such a bad thing when I get to re-visit some of my favorites.  Like this one.

Back Roads is the story of a ninteen-year-old guy who has been left in charge of his three younger sisters after his mother was imprisoned for shooting his father.  He is fiercely unprepared for the task, but doggedly keeps at it, working two full-time jobs to keep the roof over their heads and doing his best to make the girls feel safe and secure.

As family secrets come to light and Harley's obsession with Callie Mercer grows, what's left of this damaged family might just be torn apart.

I loved this book.  Harley is such a painfully real character, a mixture of grown man and helpless child.  And the secrets that are revealed about the family and how they came to be in the situation they are in are shocking, but unfortunately all too realistic.

The book captures the reality of living on the poverty line and how little help a family like Harley's can get when they want to stay together in the wake of tragedy.  It also explores the scars left by a family legacy of abuse and how a child's misunderstanding of an adult's words can lead to tragedy.

Harley Altmyer should be in college drinking Rolling Rock and chasing girls. He should be freed from his closed-minded, stricken coal town, with its lack of jobs and no sense of humor. Instead, he's constantly reminded of just how messed up his life is.

With his mother in jail for killing his abusive father, Harley is an orphan with the responsibilities of an adult and the fiery, aggressive libido of a teenager. Just nineteen years old, he's marooned in the Pennsylvania backwoods caring for his three younger sisters, whose feelings about him range from stifling dependence to loathing. And once he develops an obsession with the sexy, melancholic mother of two living down the road, those Victoria's Secret catalogs just won't do the trick anymore. He wants Callie Mercer so badly he fears he will explode. But it's the family secrets, the lies, and the unspoken truths that light the fuse and erupt into a series of staggering surprises, leaving what's left of his family in tatters. Through every ordeal, the unforgettable Harley could never know that his endearing humor, his love for his sisters, and his bumbling heroics would redeem them all.

Funny and heartbreaking, Tawni O'Dell's pitch-perfect characters capture the maddening confusion of adolescence and the prickly nature of family with irony and unerring honesty. Back Roads is a riveting novel by a formidable new talent.
Posted by Kate Larkindale at 11:37 AM 4 comments:

Would you believe it?  I got back from my trip on Friday night, and by Sunday morning I had a cold. A horrible, stuffed up, nose-streaming, sinus-aching cold.  I'm sitting here now trying to decide if I'm sick enough to stay home from work today or not.  Especially since it's freezing outside, raining and blowing a gale.  Crawling back into bed for a few more hours sounds very tempting...  But I also have a crapton of work to catch up on.

So my main goal this week is to get better.  I have too much to do to be sick!

I also got a little job on Staurday to do some writing for someone else, so I will need to get that done before the end of the week.

Then I can get back to my own revising.  Probably next week.

Somehow I never seem to be able to stick to my plans anymore.  Life just gets in my way....

What are your goals this week?
Posted by Kate Larkindale at 11:26 AM 3 comments: 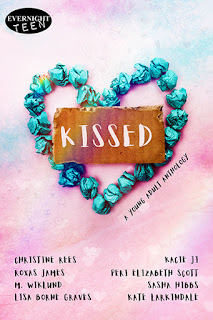 Isn't it cute?  This is the anthology my story Run To You is in and it will be out in July.  I will let you know when it's available so you can rush out to buy this collection of YA romances where each story begins and ends with a kiss.  My story is a lesbian love story between two athletes with their sights set on the Olympics.

Other things I'm celebrating this week are being home after most of the week away for work.  Everything ended up going really well at the conference, and the closing night event which I've been working on went really well too.  So I'm greatly relieved!  Now I just have to try and get my work in-box under control...

I'm not actually setting myself any real goals this week because I'm going to be away most of it, and having been to this conference before, I know how exhausting it is, and how I'll feel when I get home.

So I'm not going to beat myself up about revising my book, even though I haven't looked at it in a week.  I've done two rounds of edits on my story for the anthology, which were more pressing, so I haven't been sitting on my ass.

Once the conference is over, then I'll plan out my next week's revision.

What are your goals this week?
Posted by Kate Larkindale at 11:08 AM 1 comment:

I have completed and turned in two rounds of edits on my story for the anthology.  It means, of course, that I haven't done any more work on my novel, but that's not going anywhere.

It was my birthday on Tuesday, but the less said about that the better...

We've done a big move in the office, and I've tidied up a lot of of our space and got rid of a ton of rubbish.  I also got a new motorised standing desk which I am totally in love with!  I may even sit down occasionally now that it's not so heavy and awkward to move up and down.

What are you celebrating this week?
Posted by Kate Larkindale at 11:27 AM 5 comments: