I'm in Auckland and it isn't raining!  That probably doesn't sound celebration-worthy, but it has rained every other time I've been here in the last couple of years.  So I'm celebrating!

It's actually been fine ever since I arrived on Tuesday, but I've been at a conference in a cinema since then and haven't had a chance to enjoy it.  I'm hoping it will stay nice for the weekend because I'm staying here with a friend until Sunday night.

I'm going to be meeting up with the subject of my ghostwriting project and doing interviews over the weekend, so I'll have some new material to work with next week as I keep writing. 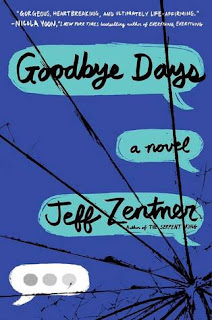 This is the second book by Jeff Zentner I've read in just a few weeks and it didn't disappoint.  It's about grief and guilt and shows how one boy works through his own by having a series of 'goodbye days' with the families of the three best friends he lost in a horrific accident.

An accident he may have unwittingly caused by sending a text that distracted the driver.

Grieving and dealing with the possibility of being prosecuted for a crime, Carver isn't doing well.  He's having panic attacks, his dead friend's sister won't even speak to him anymore and on top of it all, he's starting to have feelings for his dead friend's girlfriend.

He doesn't think he can handle spending a full day with Blake's grieving grandmother, but eventually, with th help of his therapist, manages to get to a place where he recognizes it might be therapeutic.

The first of the goodbye days, with his friend Blake's grandmother,  is such a success, Carver doesn't hesitate to agree to a second, with the family of his friend Eli.

But families are all different, and how they respond to tragedy is also different.  Eli's goodbye day does not end up being anything like as therapeutic as Blake's. And Mars's?  Well, considering Mars's father is the judge hellbent on prosecuting Carver for causing the crash, you can only imagine.

I really enjoyed this book.  Carver occasionally sounds older than the seventeen he's supposed to be, but given he's a writer, goes to an exclusive arts school, and has been forced to deal with something so horrible, it doesn't feel entirely out of place.

I liked the relationship between the friends and the goofy things they did together.  I liked that Carver had a close, open relationship with his sister, but was quite closed off from their parents.  And I liked how real the grief felt.  This isn't pretty, occasional tear in class kind of grief.  It's the kind that rips you apart from the inside, the kind that steamrollers you at odd times, usually when you least expect it.

Carver's choices and ways to cope with this also feel real.  So do the moments when he fails at dealing with it.

What if you could spend one last day with someone you lost?

One day Carver Briggs had it all—three best friends, a supportive family, and a reputation as a talented writer at his high school, Nashville Academy for the Arts.

The next day he lost it all when he sent a simple text to his friend Mars, right before Mars, Eli, and Blake were killed in a car crash.

Now Carver can’t stop blaming himself for the accident, and he’s not the only one. Eli’s twin sister is trying to freeze him out of school with her death-ray stare. And Mars’s father, a powerful judge, is pressuring the district attorney to open a criminal investigation into Carver’s actions.

Luckily, Carver has some unexpected allies: Eli’s girlfriend, the only person to stand by him at school; Dr. Mendez, his new therapist; and Blake’s grandmother, who asks Carver to spend a Goodbye Day with her to share their memories and say a proper goodbye to his friend.

Soon the other families are asking for a Goodbye Day with Carver, but he’s unsure of their motives. Will they all be able to make peace with their losses, or will these Goodbye Days bring Carver one step closer to a complete breakdown or—even worse—prison?
Posted by Kate Larkindale at 11:32 AM 3 comments:

I have a big week ahead of me this week, so I'm not certain I'll get any writing done.

Tonight we have a big free screening happening in town (if you know anyone in Wellington, tell them to get down to the Embassy Theatre wearing a red shirt by 6:30 tonight and they will get in to see The World's Fastest Indian free).

Then tomorrow morning, I fly to Auckland for a conference until Friday.  I'm staying in Auckland over the weekend to work with my ghostwriting subject on some interviews.  And to spend some time with my best friend who lives up there.  I don't get back until Sunday night, and I'll no doubt spend that getting myself and the family ready for the week ahead.

So I don't think I'll have any time to write, even if I wanted to.  But we'll see.  I may be able to steal a few pockets of writing time here and there.  I'm taking my computer, anyway.  So we shall see.

What are your goals this week?
Posted by Kate Larkindale at 11:37 AM 4 comments:

I got some work done!

Yes, I sat down and wrote some of the ghostwriting project.  Not enough, or even as much as I had hoped to get done, but some, at least.

But that's because I got edit notes from my publisher and I had to address those instead of working on my ghostwriting.  An Unstill Life will be coming out on 14 July.  I know!  That's so soon!

I'm away all of next week for work, at a conference, and working with my ghostwriting partner, so I am going to have to be pretty darned organized if I want to get any kind of marketing happening prior to release.  If anyone would like to do a launch day post, interview or anything else on or around the 14th, it would be amazing!  Just email me (katelarkindale (at) gmail (dot) com) and let me know what you would like to do, and I'll make sure you have everything you need.

What are you celebrating this week?
Posted by Kate Larkindale at 11:45 AM 2 comments: