This is one of those unique books where the protagonist is totally unlikable, yet the book is so compelling I couldn't put it down.

Reshma Kapoor is an over-achiever.  Even worse, she's a competitive over-achiever.  She has her whole life planned out to the nth degree and knows exactly what she needs and how to get those things.

So when she decides she needs some kind of extra help to strengthen her Stanford application, she lands a literary agent and starts writing a novel.

The problem is, all Reshma has ever done is study and connive her way to the top rank in her class.  She realizes that to write a novel, she'll need more life experience so she sets off to make a friend, get a boyfriend and figure out a satisfying character arc for herself.

As she writes the book and attempts to find experiences outside her own narrow world of studying and the 'right' extra-curriculars, Reshma's hard-won top ranking starts to slip and she has to decide what she will do to hold onto it, how far she'll go.

Reshma is a wholly unlikable character.  She's selfish, self-absorbed and will go to ruthless lengths to get what she wants.  It's pretty clear from the start that the reason she has no friends is because of her single-mindedness.  She will literally stop at nothing to be the top student.  Even if it means suing the school.  Twice.

Her parents are not a lot of help either.  I feel like the mother wanted things to be different, but was too busy with her own job to focus enough attention on Reshma.  Especially since her own background demanded that she study hard to succeed.

So I'm not sure I enjoyed this book that much -- it was a little like watching a train wreck unfold before your eyes -- but it was certainly memorable.

I’m your protagonist—Reshma Kapoor—and if you have the free time to read this book, then you’re probably nothing like me.

Reshma is a college counselor’s dream. She’s the top-ranked senior at her ultra-competitive Silicon Valley high school, with a spotless academic record and a long roster of extracurriculars. But there are plenty of perfect students in the country, and if Reshma wants to get into Stanford, and into med school after that, she needs the hook to beat them all.

What's a habitual over-achiever to do? Land herself a literary agent, of course. Which is exactly what Reshma does after agent Linda Montrose spots an article she wrote for Huffington Post. Linda wants to represent Reshma, and, with her new agent's help scoring a book deal, Reshma knows she’ll finally have the key to Stanford.

But she’s convinced no one would want to read a novel about a study machine like her. To make herself a more relatable protagonist, she must start doing all the regular American girl stuff she normally ignores. For starters, she has to make a friend, then get a boyfriend. And she's already planned the perfect ending: after struggling for three hundred pages with her own perfectionism, Reshma will learn that meaningful relationships can be more important than success—a character arc librarians and critics alike will enjoy.

Of course, even with a mastermind like Reshma in charge, things can’t always go as planned. And when the valedictorian spot begins to slip from her grasp, she’ll have to decide just how far she’ll go for that satisfying ending. (Note: It’s pretty far.)
Posted by Kate Larkindale at 9:30 AM 5 comments:

We're at crunch time.  Three more days until the end of November and the end of NaNo.  I wouldn't be concerned about hitting my 50K if I wasn't going to be away tonight.  My word count is sitting at just over 45K for the month, so I'm close.

But close enough to get to 50K by Wednesday?

In an effort to kickstart myself, I jumped forward in the book last night and wrote a scene that happens later in the story than where I was up to.  It helped, and I have a couple more big scenes I can write from later in the book too, so I may need to do that just to finish.

Then I can stitch everything together at my leisure as I finish the book.  Which I hope to do before Christmas.

What are your goals this week?
Posted by Kate Larkindale at 9:17 AM 4 comments:

NaNo is almost over!  With 5 days left, I'm sitting just under 43K words, so I'm pretty confident I'll hit the 50K.  Even with going overnight to Auckland for an event on Monday.

Those 50K words aren't going to be very good, or very interesting, but at least I will have written them.

It's been a very busy week at work.  I thought I was going to have time to catch up on all the little things I've been putting off and maybe even tidy my desk, but somehow it's ended up being even busier than usual.  And that's no easy feat!

And I have a lot on this weekend too.  I guess it's true when they say no rest for the wicked….  Luckily I enjoy my wickedness!

What are you celebrating this week?
Posted by Kate Larkindale at 1:23 AM 4 comments: 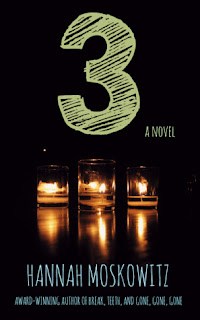 I really enjoyed this book because it delves into an area I don't think I've ever seen in YA fiction before - polyamory. It's something that has always fascinated me because I don't believe one person can ever satisfy all your emotional, sexual and intellectual needs.  The whole monogamous relationship with a single partner idea seems designed to leave some part of you unsatisfied.

There was jealousy, of course.  I think it's impossible in a situation like this for there not to be, especially when one person in the relationship is new to the whole idea of polyamory. I was a little disappointed that the girl/girl side of the romance wasn't explored a little more, but I felt that was consistent with Taylor's character.

I found all the characters interesting and real and enjoyed spending time with them.  I liked that Taylor had a life outside the relationship that she was struggling to negotiate too.  A new step-family, a best friend who she's been inseparable from since childhood and a wedding-rattled mother make up some of the cast of characters.

My one issue with the book was the poor editing.  There were so many small errors in the text and each time I hit one, it drew me out of the story for a few seconds.

But enough from me.  Here's the blurb!

Taylor Cipriano had everything figured out, back when she lived with her single mother in Miami. Now, she's moved upstate for her junior year to live with her mom's boyfriend and her soon-to-be-stepsister and is trying to figure out who she is out of the shadow of her best friend. When she meets Theo—quirky, cute, sensitive Theo—he seems like a great match...except he has a girlfriend. Josey, icy and oh-so-intimidating.

But Theo and Josey aren't like anyone Taylor's met before; Josey grew up in a polyamorous family, and the two of them have a history of letting a third person in to their relationship. It's nothing Taylor's ever considered before...but she really likes Theo.

Her feelings for Josey, though?

That's where it really gets complicated.

3 unwraps who we love and how we love, in numbers as odd as we are.
Posted by Kate Larkindale at 9:35 AM 2 comments:

Considering everything that has been going on, I am actually on track with my NaNo book.  I cracked 33K words yesterday, and am now feeling like getting to 50K in 9 days is possible.  Not easy, but possible.  I'm going to need to work hard and not take any days off this week because I have to go to Auckland for work next week and will lose a couple of evenings' work there.

If at all possible, I'd like to crack my 50K by Sunday so I won't have to worry about the damn thing while I'm away.  If I can get a couple more 3K days under my belt, that all work.

On the non-wordcount side of the project, it's pretty terrible.  I keep realizing I've written things in the wrong order, and that thinks need mentioning earlier or things need changing.  So I've gone through and written myself revision notes where I feel like things need mentioning or things need switching around.  So hopefully that will make revising a little easier.  I often forget to do that and then find I can't remember what I was thinking when I get to the revision stage.

What are your goals this week?
Posted by Kate Larkindale at 9:21 AM 2 comments:

Mostly still being alive.  And having a home to go to, and running water, electricity and everything.

After the earthquakes, there are people in some parts of New Zealand who don't have those luxuries.  A friend of mine's family home has been destroyed and the entire family are now struggling to decide where to go and what to do.  They've lost their sanctuary and their memories.  She wrote very eloquently about it here.

Even here in Wellington, where by Wednesday most of us were back at work and business as usual, buildings are being discovered to be unsound and streets closed around them to keep people safe.

And then there's the aftershocks.  They keep coming.  Most of them are so light we don't feel them, but every now and then there's a doozy.  I just checked the Geo-net site and since I got up half an hour ago, there have been 14 aftershocks ranging in strength from 2.4 to 3.5.

And then there's the tsunami danger too.  I live on a flat piece of land about three or four blocks back from the see in two directions.  So if there is a risk of tsunami, as there was on Sunday night, we evacuate.  Luckily there's a hill behind us that we can go up.

But we've had to think about all sorts of things this week.  My kids go to two different schools, luckily in around about the same area and my partner works at home, near both schools.  But I work in the city.  If there is a big one while we're and work at school, it's likely I'll be trapped in the city.

So much to think about.  But also much to celebrate.  I refuse to let this make me live in fear.  In fact, I'm going to cherish every moment I have because you never know when the next big one is going to hit.