I got a lot of writing done over the long weekend, and am feeling pretty good about where this book is going, weird empty spot in the middle and all.

Unfortunately, this week looks like it's going to be a really busy one, so I'm not sure how much work I'll get to do on it.  I may have to wait until next weekend to get back into it.  We shall see...

But anyway, the goal is to get it finished within the next month.  Then I will do a bit of a polish up before getting my critique partners to take a bash at it.

Other goals this week are to get my oven fixed (please?  It's been almost two weeks) so I can cook properly again.  I never realized quite how much I use the oven until it was broken.  The electrician who came last week confirmed the problem was with the oven, so the oven specialist is coming tomorrow.  Fingers crossed it's something he can fix without having to order parts from Timbuktu.

Because we had Anzac Day on Thursday, I decided to take Friday off work so I could have a second four-day weekend.  If course it means the two days in the middle I did have to work were insane, but I guess that's the price you pay for the extra time off.

I feel like I'm finally on a roll with finishing the book and actually wrote a good chunk yesterday.  Hopefully I can do the same today and tomorrow and make some real headway toward finishing the damn thing.  I know there will be a lot of editing to do once it's done, but that's okay.

One of my sons is back from his holiday, so I plan to do something with him today.  The other gets back on Sunday, just in time to go and see the symphony orchestra play the score to The Empire Strikes Back live.  I'm not a Star Wars fan, but I do love films with live music and because the kids are such huge Star Wars fans I thought this might be something a little different we could do together.

School starts again on Monday.  Somehow these holidays haven't felt nearly as long and painful as they usually do.  Probably because I've been on holiday for part of it, and the kids have both been away for parts. 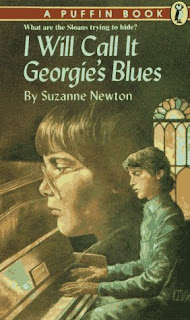 Reverend Mr. Sloan is a time bomb waiting to go off. Behind his kindly public persona is an intolerant, demanding parent who terrorizes his children. Neal escapes his father in the world of music, but his frail brother Georgie is headed for a breakdown that almost no one will realize.
Posted by Kate Larkindale at 11:18 AM 1 comment:

I think I figured out what needs to happen with the book I've been struggling to finish, and over the long weekend I made some changes that I think will make things work better and allow me to finish writing it.

So this week my goal is to chip away at those changes and keep working on finishing this story.  It's one I really want to tell, but getting it right is so very tricky.

While cleaning out a closet over the weekend I found copies of some of the first novels I ever wrote and thought it might be fun to read them now and see what they are like.  The first one was really very bad.  The story and the characters weren't well developed and even though it was first person narrative, there was very little inner monologue so you never even really got to know the MC!

My second novel was better, but still not great.  There was a lot of telling and because I was trying to tie together two stories in two time periods, neither got the attention they deserved.  But the characters were better in this one, and their motivations.

The third one actually showed some potential, despite being overly-melodramatic in terms of plot.  But I think I re-wrote that one several times to get to that point...  This one has a lot of characters, all of whom get their POV shown at times, and I think if this was to be re-worked into a publishable book, one character would need to be the focus instead of five.

Not that I think I'll be re-working it. The book I'm working on now seems to be a direct descendent of this early idea, but written better and with more focus.

So I'm feeling grateful that it was my fifth novel that was the first to get published.  I needed all those earlier attempts to learn how to write a novel.  Plus all the short stories I wrote in between and alongside those books.

What are your goals this week?  Have you ever gone back to read your early attempts at writing and cringed in horror?
Posted by Kate Larkindale at 11:17 AM 2 comments:

It's a long weekend!

And next week I'm only working two days because Thursday is a public holiday and why not have two 4 day weekends if you can?

Plus, this long weekend I'm going to be childless.  And largely alone because my partner is working most of it.

I haven't really decided what I'm going to do yet, but I know reading is going to be a big part of it.  And eating delicious food. Going to the gym. Maybe writing a bit.  And if there's anything worth seeing, I might go to the movies.

But just the fact I have nothing I HAVE to do makes the weekend one of infinite possibilities...

What are you celebrating this week?
Posted by Kate Larkindale at 11:00 PM 2 comments: