After the craziness of the past few weeks, this week seemed very quiet and very long.  I am looking forward to the weekend and being able to do very little for a couple of days.  I might even read a couple of books.  I'm a long way behind on my Goodreads challenge, so I need to do some catching up.

I did some more editing of my book, and hope to get more done over the weekend too.

I have quite a few Christmas presents sorted already which is very unlike me.  I just need to find something for my niece and she's easy to shop for.  And do my usual Christmas baking for the people who really don't need anything else.

What are you celebrating this week?
Posted by Kate Larkindale at 9:23 AM 4 comments:

Books I've Read: You'd be Mine 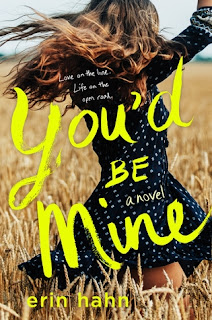 I had the opportunity to read an early copy of this book (thanks Netgalley) and was surprised at how much I enjoyed it.

It's not a new story - two damaged individuals trying to figure out how to love one another without allowing their demons to destroy them - but felt fresher and newer than this story should have.

Clay Coolidge is on top of the world, at least from the outside. He's headlining a country music tour around the country, selling out massive venues everywhere he goes. Onstage he's cocky, charming and sexy as hell. Backstage he's drinking too much, getting into fights and barely managing to hold himself together.

Annie Mather is the daughter of two of country music's greatest stars, a couple who burned brightly, but burned out quickly. Terrified of ending up a casualty of the business like her parents, Annie has resisted playing music for audiences despite loving it more than anything else. When Clay Coolidge shows up at her door begging her to join his tour as opening act, her passion for performing wins and she reluctantly agrees.

And as Annie's career begins to skyrocket, Clay's begins spiraling out of control.

So I identified with Annie and Clay and the struggles they faced on the road and enjoyed their company as they tried to figure out how to overcome their pasts and just be together in the moment. It isn't a very deep book and it isn't telling a new story, but it's an easy, fun read that will definitely engage you for the few hours you spend in its world.

But don't just take my word for it. Here's the blurb:

Annie Mathers is America’s sweetheart and heir to a country music legacy full of all the things her Gran warned her about. Superstar Clay Coolidge is most definitely going to end up one of those things.

But unfortunately for Clay, if he can’t convince Annie to join his summer tour, his music label is going to drop him. That’s what happens when your bad boy image turns into bad boy reality. Annie has been avoiding the spotlight after her parents’ tragic death, except on her skyrocketing YouTube channel. Clay’s label wants to land Annie, and Clay has to make it happen.

Swayed by Clay’s undeniable charm and good looks, Annie and her band agree to join the tour. From the start fans want them to be more than just tour mates, and Annie and Clay can’t help but wonder if the fans are right. But if there’s one part of fame Annie wants nothing to do with, it’s a high-profile relationship. She had a front row seat to her parents’ volatile marriage and isn’t interested in repeating history. If only she could convince her heart that Clay, with his painful past and head over heels inducing tenor, isn’t worth the risk.

Erin Hahn’s thrilling debut, You’d Be Mine, asks: can the right song and the perfect summer on the road make two broken hearts whole?
Posted by Kate Larkindale at 9:24 AM No comments:

Can you believe it's the last week of November?  Already?  Where has the year flown off to?

Having finished the big projects and events at work, it's time to play catch-up on some things that have slipped by the wayside while I was busy doing all the big stuff.  I'd like to leave for our summer break with everything ship-shape so I don't come back to too much chaos in January.

I've been playing with a revision on one of my books that I think may solve the problem it's always had.  Fingers crossed it works.  This week's goal is to keep going with this, even if I only get through a chapter or two a day.

I finished my beta read for a friend and will be sending the notes to her today.  And then I have a new book from another author to read and review pre-release.  My goal is to try and finish the book I'm reading on my Kindle now before the end of the week so I can get started.

What are your goals this week?
Posted by Kate Larkindale at 9:15 AM 3 comments:

It has been a super-long week with a lot on.  I haven't been home any night except Monday, so I'm looking forward to a quiet weekend at home.  My family probably haven't eaten any veggies since Monday, so I will have to remedy that!

I've only made it to the gym once this week too, with all the days I've spent out of the office.  So I will need to get onto that too over the weekend.

It's only a few weeks until Christmas, so I need to think about what else I need to get as Christmas presents and find the time to actually go and buy them.  For once I'm actually feeling quite organized and there's still a month to go.

What are you celebrating this week?
Posted by Kate Larkindale at 9:19 AM 4 comments: