Books I've Read: I Had Such Friends 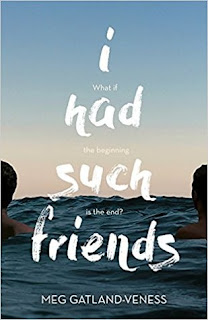 I didn't enjoy this one as much as I wanted to.  Set in rural Australia, the book tells the story of Hamish, a lonely outsider who has only one friend at school, an equally shunned loser.  So when the charismatic star of the school footy team starts paying him attention after the death of school top-dog, Charlie Parker, Hamish basks in it.  And when Charlie's girlfriend, the beautiful Annie Bowers starts talking to him too, Hamish's life takes a turn for the better.

But not everything is what it seems.  People harbor secrets about themselves and others and Hamish soon finds himself in the middle of it all, keeping secrets for other people, and about himself.

I found Hamish to be a rather uninspiring central character.  There was nothing about him that made me believe all these other people would be drawn to him.  And the way he treats his one and only friend, and even his own family, didn't endear him to me at all.  He also seemed very out of touch with his emotions.

And once again, the ending troubled me. I won't ruin it by telling you what happened, but let's just say it doesn't go anywhere new, and I felt like it ruined any usefulness the book might have had in opening up conversations about some troubling issues that many teens face.  Which is a shame because teenagers living in small Australian towns probably need books that offer them options and visions of a different, better way of life more than anyone else.
But don't just listen to me.  Here's the blurb:


When Charlie Parker dies, it affects everyone who knew him. Everyone, that is, except for seventeen-year-old Hamish Day, the boy who lives on a cabbage farm and only has one friend. But Hamish soon finds himself pulled into the complicated lives of the people left behind. Among them is Annie Bower, the prettiest girl in school. As he uncovers startling truths about his peers, his perspectives on friendship, love, grief and the tragic power of silence are forever altered.

Meg’s own teaching experience has enabled her to delve deeper into the true nature of a universal high school experience. I Had Such Friends will speak to high school students/teenagers on a personal level, and foster important conversations among Australian youth, school and family culture on issues including abuse, failure and neglect.

With hard-hitting themes including unrequited love, abuse, neglect, sexuality, bullying, prejudice, death and suicide, I Had Such Friends is a poignant journey of self-discovery, grief and the tragic power of silence. A gripping look at adolescent pain with a narrative maturity that accurately reflects its YA milieu, I Had Such Friends resonates with young adult audiences and pushes them to reflect on their own ‘sliding doors’ moment.
Posted by Kate Larkindale at 9:15 AM