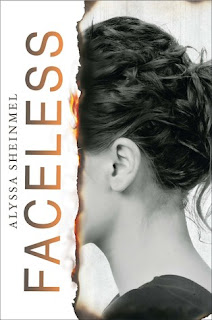 This is one of those books I picked up because the cover intrigued me.  Then the blurb sounded interesting enough, so I thought I'd give it a shot.  And I'm glad I did because this is an engrossing, thought-provoking read.

Maisie Winters is a pretty average girl.  She's a high achiever at school, runs track and is looking forward to telling her boyfriend, Chirag, she loves him when they go to prom together.

But one morning while running, a freak storm changes everything for Masie.  She wakes up in the hospital to be told half her face has literally been burned away and that she has been in an induced coma to keep her from feeling the pain.

When the opportunity for an experimental and rarely-done face transplant arises, Maisie's parents are divided over whether this will be a good thing for her.  But having seen the melted ruin of her own features, Maisie decides this will be an opportunity for her life to return to normal and agrees to the surgery.

But far from normal, Maisie wakes up with a stranger's face attatched to her own.  She has scars, a new nose and even her cheeks aren't the same shape they were before.  And when she goes home, nothing is at all normal.

The book follows Maisie's journey as she struggled to accept herself as a new version of the girl she once was, a girl with scars, a girl who has to take huge numbers of immunosuppressents to keep her body from rejecting her new face, a girl who can't run and a girl that Chirag maybe doesn't love anymore.

I enjoyed Maisie's voyage to self-acceptance, even when she made stupid decisions and acted badly toward people who were only trying to help.  I felt her actions and emotions were very realistic and highlighted how difficult it must be to deal with something so life-changing as learning to accept a face that no longer looks like your own.

When Maisie Winters wakes up, she’s in the hospital.

The last thing she remembers is running through the hills of her neighborhood one misty morning. Slowly, she puts the pieces together. Before she could make it home, a storm gathered. Lightning hit a power line and sparks rained down, the hot-burning electrical fire consuming her. Destroying her face. Where her nose, cheeks, and chin used to be, now there is…nothing.

Maisie’s lucky enough to qualify for a rare medical treatment: a face transplant. At least, everyone says she’s lucky. But with someone else’s features staring back at her in the mirror, Maisie looks—and feels—like a stranger. The doctors promised that the transplant was her chance to live a normal life again, but nothing feels normal anymore. Before, she knew who she was—a regular girl who ran track and got good grades, who loved her boyfriend and her best friend. Now, she can’t even recognize herself.

New York Times bestselling author Alyssa Sheinmel has created a gripping and gorgeously written tale of identity and love. This is a story of losing yourself and the long, hard fight to find your way back.
Posted by Kate Larkindale at 11:48 AM