S is for: Sleeping Dogs 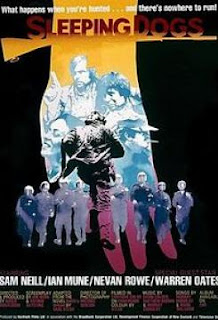 Roger Donaldson’s feature debut was the first local feature to gain international recognition and get distribution in the USA, and this military fantasy has even more resonance today than it did on its release.

With a tiny budget, Donaldson manages to depict a nation’s civil war by keeping the focus on one man caught up a conflict he wants no part of and only opening up for some well-thought-out action sequences.

The tension is kept at a high pitch through the drip-feeding of information. We don’t discover Smith’s situation all at once, but as it becomes clear, his motivations for doing what he does also come into focus. We are kept almost exclusively in Smith’s point-of-view, showing a man unwittingly being used by both sides of the conflict as the government becomes a dictatorship and the police force an army.

A very young Sam Neill shows the mixture of vulnerability and steely determination that has characterised many of the roles he’s gone on to play in the years since this startling debut.

Sleeping Dogs kick-started the New Zealand film industry in the 1970s and was instrumental in the establishment of the New Zealand Film Commission. So I have to thank Roger Donaldson for making this film or I might not have the job I have today.
Posted by Kate Larkindale at 12:26 AM