P is for: The Piano 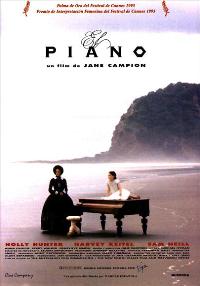 Passion is the most basic and primal human emotion and The Piano captures this in all its ecstasy and unpleasantness. When Ada, a mute woman with an illegitimate daughter, arrives in New Zealand in the mid-1800s, she brings with her a piano. The man she has been sold to, Stewart, refuses to bring the piano up to the house, telling her it is too bulky.

When he then sells it to a fellow-Englishman, Baines, the indignity is almost more than Ada can bear. As part of the deal, Baines, who has embraced the Maori way of life, asks Ada to teach him to play the instrument. When he offers her a way to get the instrument back, Ada is unprepared for the price she’ll have to pay.

Rich with symbolism, and featuring Anna Paquin’s breakthrough, Oscar winning performace as the mischievous daughter, this film deservedly won the Cannes Film Festival Grand Prix. Featuring glorious cinematography and a muted colour pallet that highlights the desolation of the coast, this is a film that will not easily be forgotten.
Posted by Kate Larkindale at 12:17 AM