N is for: The Navigator 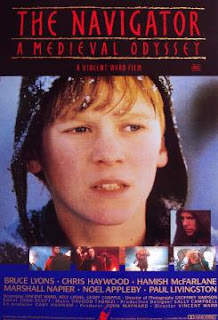 In medieval Cumbria, a young boy is plagued by visions. It is 1348 and the small mining village lives in fear of the advancing Black Death. Convinced by his hallucinations that he is destined to save his village, the young boy convinces a group of men to follow him into a tunnel. They dig deep and find themselves emerging into Auckland, New Zealand in 1987.

Following the boy’s portents, the time-travelers must negotiate such strange terrors as motorways and nuclear submarines while they attempt to save their own.

Nominated for the Palm d’Or at the Cannes Film Festival, this film won awards at both Australia and New Zealand’s film awards.

I was taken to see this on a school trip when I was about 14 or 15.  At the time, I didn't appreciate it at all and remember writing a very scathing essay when I got back to school about all the people who looked like Baldrick (yes, Blackadder was popular at the time) and thinking I was very clever. I wasn't.