T is for: Two Little Boys 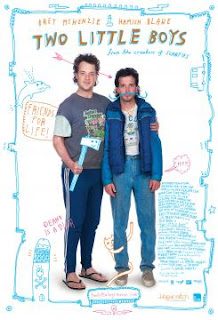 Based on the comic novel by Duncan Sarkies, Two Little Boys follows two friends in the aftermath of an incident involving a meat pie, a ginger cat and a Norwegian soccer player. Their friendship, already stretched to the limit, is tested time and time again as they struggle to hide the truth from everyone around them.

Things grow even more complicated when the unfortunate Nige invites Gav to the family bach in the Catlins, a place Deano and Nige have been going to since childhood.

To give away more of the story would be to ruin what is a hilarious, irreverent and quirky film. But rest assured, bogons have never been funnier. The scenery is gorgeous and striking and becomes as much a character as the three guys travelling through it.

There are flashback moments and fantasy moments that are both laugh-out-loud funny and poignant, none more so that when Nige imagines himself and Deano in the trenches of WW1.
Posted by Kate Larkindale at 12:28 AM