A is for: An Angel At My Table

I somehow missed the 'introduce your theme' day a week or so ago, so allow me to do so now...  My theme for this year's A-Z Challenge is New Zealand films.  I'm not sure there are enough films to get from A-Z, but we'll give it a shot! 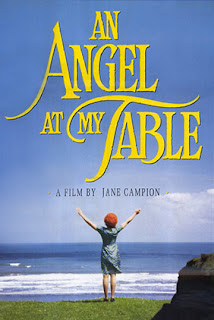 This striking film has become a well-deserved classic. It traces the life of author Janet Frame, from her childhood as an outsider in a comfortable family, through the awkwardness of adolescence and young-adulthood. Painfully shy, she finds socializing painful. When she freezes under the glare of a school inspector during her first job as a teacher, a series of doctors misdiagnose her as schizophrenic, sending her on a torturous journey through New Zealand’s arcane mental health system.

Two-hundred electro-shock treatments later, she is released and wins a grant to study overseas, and in Spain, she finds a community amidst a group of artists and writers. Destined to always be a little odd, she becomes more comfortable with life and her role in it, and her creativity flourishes.

Simply told with a quiet beauty, this is a wholly absorbing film that will capture you from its very first moments and never let you go. Its focus on the details of a single life make it a compelling and absorbing journey.

I re-watched this in 2015 for the first time since I saw it at a film festival in the early 1990s and was surprised how much I enjoyed it - and how much I had forgotten. I was also surprised at how little time was spent on the mental hospital scenes because I remembered them being much more significant and harrowing.
Posted by Kate Larkindale at 12:30 AM