Q is for: The Quiet Earth 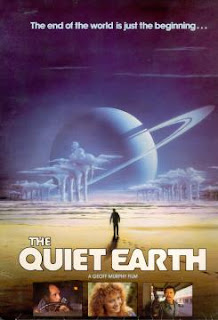 The film opens with Bruno, as Zac Hobson, waking up with one hell of a hangover. It comes to light that he’d actually been trying to commit suicide, and what he’s waking up from is an overdose of pills, not a hard night on the town. He’s not entirely with it, so it takes a while for him to realize that he is all alone in the world. There are no people or even animals around.

It’s not until he arrives at the laboratory where he works and finds the dead body of his project director that the truth begins to sink in. He uses a dictaphone to announce his discovery: a malfunction in the project he was working on has resulted in a massive electrical wave that has either killed the entire population of earth or thrown them into another dimension.

Zac realizes he is alone.

The first half of the film explores Zac’s solitude and the way it drives him slowly mad - he winds up in a pink petticoat running around a football field. Once other people show up (it turns out that if you were dying at the moment the pulse hit, you survived), they try to overcome their myriad differences to work together. Zac’s scientific mind figures out that the pulse that destroyed the world may happen again soon, and if they manage to destroy the equipment in the lab, they may be able to save what’s left of the earth.
I know I've used this film before during the A-Z, but I have a renewed appreciation for it now after having seen a beautiful new digitized version in a cinema last year, and heard Geoff Murphy talk at length about it.
Posted by Kate Larkindale at 12:30 AM