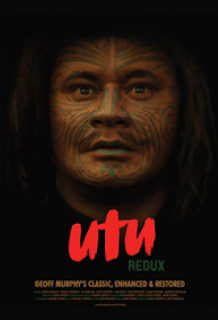 Geoff Murphy's original 1983 classic, digitally re-mastered and with some excised scenes added back in.

Meaning retribution, Utu takes an unflinching look at the British colonial presence in the country during the 1870s. Te Wheke, a scout and guide for the British army, comes across his village, wiped out in a massacre by the British. He deserts and vows to take revenge against his former employers. Joining a group of other, equally angry Maori, he sets in motion a brutal campaign of terror and murder. It begins with a single woman and the burning of her house and spreads far and wide from there.

As Te Wheke, Anzac Wallace gives an unforgettable performance, ably supported by Kiwi icon Bruno Lawrence. Utu has lost none of its power or relevance in the years since its initial release, and this version gives new life to a story that should never be forgotten.

On a recent visit to New Zealand, Quentin Tarantino named Utu as his favorite New Zealand film and it's not difficult to see why he might have been drawn to its brutal violence and the moral complexity that comes hand-in-hand with films dealing with colonialism (especially as a white person).
Posted by Kate Larkindale at 12:31 AM