M is for: Mr Wrong 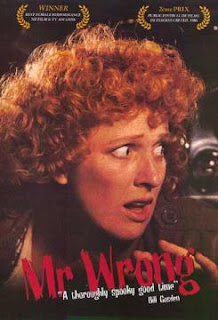 The idea that a car can be haunted must have been in the zeitgeist in the '80s because like Christine, this film has a haunted vehicle at its center. Maybe it is the terrifying notion that this massive piece of steel could take on a mind of its own...

When Meg buys a used Jaguar from a shady car dealer so she can visit her parents on their rural farm, she gets a lot more than she expects. Soon after getting it, she starts hearing choking sounds coming from the back seat. Things get even weirder when she picks up a pair of hitchhikers who mysteriously disappear into thin air.

This thoroughly engrossing ghost story toys with traditional thriller tropes and tosses in enough red-herrings to keep viewers constantly second guessing what might be going on. Meg is an engaging protagonist, an every-woman, modest and unpretentious. Yet she is able to dig deep and find strength she never knew she possessed when face with the terrifying unknown.

In its examination of fear and women’s reaction to it, Mr Wrong is far more than just another ghost story.
Posted by Kate Larkindale at 12:30 AM