O is for: Once Were Warriors 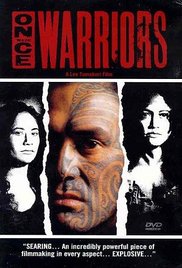 One of the most successful New Zealand films of all time, Once Were Warriors portrays the horrible reality of domestic violence in a South Auckland family.

Jake and Beth Heke appear to have a good relationship. But when alcohol is added, as it is far too often, both can become new people. Jake’s temper is terrifying, especially in its unpredictability and savagery. When Beth wakes to a face swollen beyond recognition from another beating, she says to a friend “I have to learn to keep my mouth shut”.

The kids are among the biggest victims of their volatile parents’ drinking. One has already moved out to join a gang and a second is on that path too. Their daughter, Grace, escapes into her journal and with her druggie boyfriend who lives in a junked car.

Never before has the devastating effect of alcohol on a family been so vividly evoked on film. On its release, the film provoked much discussion and outrage about the cultures of drinking and violence so inherent in New Zealand society.

More than 20 years on, the issues the film deals with are just as relevant as they were then, and the film remains a seminal part of New Zealand's film history.
Posted by Kate Larkindale at 12:30 AM