D is for: Desperate Remedies 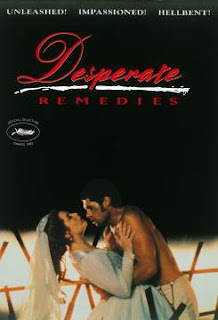 Set in a highly stylized nineteenth century, Desperate Remedies is a subversive, operatic melodrama in which women hold the upper hand and outmanoeuver the men.

Drothea runs a successful drapery business. Her sister, Rose is addicted to opium, and her supplier, Fraser. Lawrence is a tough, penniless immigrant. Dorothea wants Lawrence to marry Rose, to save her from herself, but Rose has only eyes for Fraser. Dorothea finds herself increasingly attracted to Lawrence, despite her longstanding relationship with her companion, Anne. And as he endeavours to dispatch Fraser, Lawrence falls for Dorothea. Sensing a rival for her affections, Anne pushes Dorothea toward a marriage of convenience with William, a politician who will do anything to get ahead.

As the various plots and entanglements of the heart converge, Dorothea finds herself torn between her head and her heart in a battle that only love can free her from.

Shot entirely in a studio, the film employs lush lighting and highly stylized art direction that draws heavily on women’s films of the 1920s. It premiered at Cannes in 1993 and screened at numerous festivals after that, picking up awards around the world.
Posted by Kate Larkindale at 12:30 AM