R is for: Rain 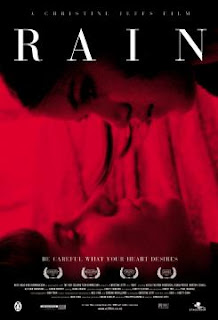 This moving tale of the end of childhood and the loss of innocence uses the landscape to effectively reflect the psyches of its characters.


Janey, at thirteen, is determined to grow up by the end of summer. The endless booze-soaked parties her parents throw bore her and she finds herself drawn to Cady, a rugged drifter who also begins a relationship with her mother.

Both parents are shown to be suffering from a similar boredom, trapped in a relentless cycle of partying as they struggle to cling to their youth. Desperate to keep her parents together, Janey uses her untested womanhood to draw the stranger away from her mother.

This is a haunting film, fragile, sensitive and ultimately tragic just like the people whose lives it examines.

I first saw this film in Australia and was struck by how familiar everything felt. The locations and the whole feel of the summer holiday with family made me ache for home and my own childhood summers at the beach.  Although I'd like to think I was better behaved than Janey...  But I probably wasn't.
Posted by Kate Larkindale at 12:30 AM