F is for: Forgotten Silver 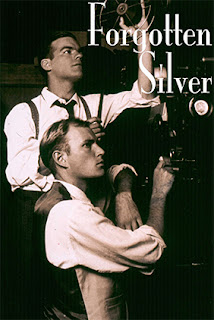 This one should have been my first post of the Challenge because Forgotten Silver is akin to the best April Fool's joke ever.

The morning after its screening on NZ television, the whole country was abuzz with the incredible story of previously unheard of local filmmaking pioneer, Colin McKenzie. According to the documentary made by Peter Jackson and Costa Botes, McKenzie made his own film stock out of flax and egg whites, invented his own sound and colour processes and used both tracking shots and close-ups before anyone else. He later singlehandedly built a Biblical city for his epic adaptation of Salome which was funded by Soviet Russia and the Mafia.

It was just so far out there, it couldn’t possibly not be true.

The outrage and vitriol that followed when the filmmakers announced their documentary was in fact a mockumentary has yet to be seen again.

It's impossible to imagine a hoodwink this big being pulled off today.  The internet has made this type of prank almost impossible.  People working on this film had to sign non-disclosure agreements, stating they wouldn't talk about the project they were working on, but it only takes one slip of the tongue these days to set off a social media avalanche.  Not to mention anyone passing by might get curious about what these people are doing building something that big in the bush and take a quick snap on their phones.
Posted by Kate Larkindale at 12:30 AM