G is for: Goodbye Pork Pie 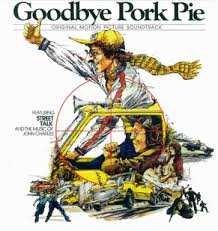 From one end of the country to the other nothing could stop the men, the mini, the madness.


When a middle-aged man whose wife has just left him and an unemployed teenager hit the road in a yellow mini with the cops hot on their tail, madness and a cross-country journey ensue. The difference in the pairs’ ages creates an unusual dynamic.

The scenery is glorious, showcasing many of the different landscapes New Zealand has to offer. The people the pair meet up with on the way are interesting, friendly, likable and often hilariously kooky. What they all have in common is the desire to stick it to the man and help out the guys on the lam.

Geoff Murphy’s film has attained well-deserved classic status for its humour, energy and realistic portrayal of the country and the spirit of its people.

Goodbye Pork Pie is getting the remake treatment this year, with the reboot being directed by Matt Murphy, Geoff's son.
Posted by Kate Larkindale at 12:30 AM