H is for: How Far Is Heaven? 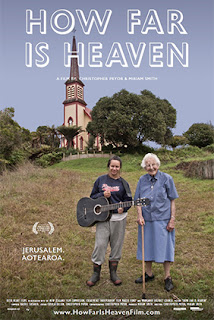 Shot while the filmmakers were living in the tiny settlement of Jerusalem on the Whanganui River, this gentle pictorial film shows the changing beauty of its location over four seasons. In the predominantly Maori community, three Pakeha nuns live and work in the church and convent founded in 1880 by Sister Suzanne Aubert. Whether their presence is necessary anymore is a question that threads its way through the film.

The sisters work the land, make jam and preserves and teach at the local school. They too question their relevance to the community, none more so than the newest arrival, Sister Margaret Mary. She’s very conscious of how much she doesn’t understand, and how much she needs to learn, but has a way with the children she teaches, especially when the subject is music.

The clash of cultures is evident in the way the taniwha under the bridge has a greater resonance to the kids than the Christmas nativity play. And what gems these children are. We meet several, including the precocious Chevy, gleefully mad Damien, and DJ, a thoughtful boy whose every thought crosses his expressive face and whose tongue has no filter.

Whether or not these sisters belong in Jerusalem, their influence on the community is clear, even if they will forever remain outsiders there.

Gorgeously shot, the camera is non-intrusive in this film, not taking any particular point of view but preferring to just document and show what life is like in this tiny settlement. This lack of narrative focus could be jarring to those who are used to documentaries having an agenda, but I found it refreshing. The questions the film raises are left unanswered so the viewer is forced to think long after leaving the theatre.
Posted by Kate Larkindale at 12:30 AM