J is for: Jack Brown Genius 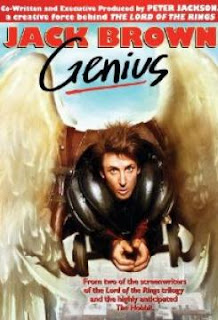 This quirky romantic comedy tells the story of a thousand-year-old monk named Elmer who invades the brain of young inventor, Jack. Elmer is desperate to escape eternity in hell and persuades Jack to fly him to heaven.

Of course, as soon as Jack starts raving about flying and millennial monks, he’s dispatched to a mental institution. There he is quite happy to experiment with wing designs, determined to fly. But Jack isn’t left alone to pursue his quest for flight, and soon he’s crashing from cliffs, racing through burning buildings, plummeting from sky-scrapers and encountering deep passion.

Featuring early work from Weta Workshop, this is a rollicking adventure film that mixes fantasy, reality, whimsy and romance.
Posted by Kate Larkindale at 12:30 AM