E is for: Eagle vs Shark 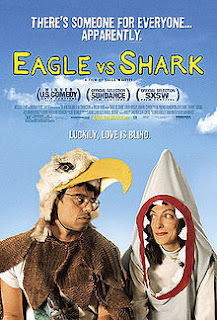 Taking cues from Napoleon Dynamite, Eagle vs. Shark is a misfit love story that celebrates geeks in a joyful and infectious way.

Lily has a dead-end job at a fast food joint, no friends and a crush on Jarrod, a video store clerk who doesn’t know she exists. Any wonder she’s depressed? At a costume party, she impresses him with her favourite animal costume (a shark) and they soon become one of the oddest couples you’re likely to see on screen.


Their relationship falters when Jarrod tells her he needs to focus on his martial arts training so he can take down a rival he’s had since his schooldays. Lily refuses to accept this, and together she and Jarrod navigate the hurts and joys that love can bring.

With a kooky visual sensibility to go along with the characters’ quirks, Eagle vs. Shark is a loopy and charming film about friendship, family, love and obsession.
Posted by Kate Larkindale at 12:30 AM