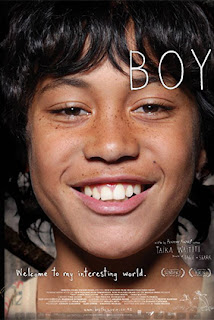 The most successful local film ever at the New Zealand box-office, Boy is the hilarious and heartfelt coming-of-age tale about heroes, magic and Michael Jackson. Set firmly in the 1980s, the film is narrated by an extremely likable 11-year-old known as Boy. When his father, Alamein, sweeps back into town, towing a couple of members of his motorcycle gang, Boy is thrilled, certain his dad is back just for him.


In fact, Alamein has returned to find the money he buried somewhere near the family home. Unfortunately, he can’t remember exactly where. The film generates much of its tension around the uncertainty of the relationship between Boy and Alamein. Boy worships his father, but rather than this misguided hero-worship exploding in a single act, Boy’s eyes are opened to his real father little by little and through this discovery, he grows up.

With colorful fantasy sequences used to show Boy’s exuberant, childish imagination, the film’s visual style is fun and quirky. The film doesn’t shy away from showing the darker side of this seemingly idyllic place, but it doesn’t dwell on the darkness because Boy doesn’t.

As Boy, James Rolleston is perfect. He is natural, unguarded and exudes hope even in the face of adversity. It’s impossible to imagine the film with any other actor in the role.

From Taika Waititi, director of Eagle Vs Shark, What We Do In The Shadows and the recently released Hunt for the Wilderpeople.
Posted by Kate Larkindale at 2:31 AM