Books I've Read; Where We Go From Here 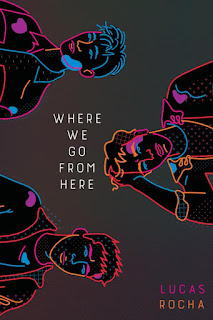 I picked this one up without picking up that it was set in Brazil which just made it all the more fascinating to read.  It follows a group of young gay men as they work through their various experiences of living with or around HIV.

Victor and Ian meet at a testing clinic - Ian tests positive while Victor, thankfully, doesn't.  Yet despite the good news, Victor finds himself furious at the guy he's been dating for not telling him his HIV status before they had sex.  Yet he still suggests to Ian, a guy he has only just met, that he might want to speak to Henrique as someone who has lived with HIV for some time.

As they navigate the complexities of their relationships, their HIV status and their attitudes, these three men find their lives becoming increasingly entangled with all the messiness that comes along with new friendships and new love.

I enjoyed this one because while the story was not that new to me, the setting gave it a different flavour and I was interested in seeing the way a different culture responds to something familiar.  Each of these guys has a different experience of HIV and their outlooks are different as well.  Victor's attitude frustrated me at times even while I felt it was understandable on some levels.

So I'd recommend this one if you're interested in seeing something familiar in a somewhat new light.

But don't just listen to me.

An absorbing debut novel about three gay young adults in Brazil whose lives become intertwined in the face of HIV, perfect for fans of Adam Silvera and Bill Konigsberg

Ian has just been diagnosed with HIV.

Victor, to his great relief, has tested negative.

Henrique has been living with HIV for the past three years.

When Victor finds himself getting tested for HIV for the first time, he can't help but question his entire relationship with Henrique, the guy he has-had-been dating. See, Henrique didn't disclose his positive HIV status to Victor until after they had sex, and even though Henrique insisted on using every possible precaution, Victor is livid.

That's when Victor meets Ian, a guy who's also getting tested for HIV. But Ian's test comes back positive, and his world is about to change forever. Though Victor is loath to think about Henrique, he offers to put the two of them in touch, hoping that perhaps Henrique can help Ian navigate his new life. In the process, the lives of Ian, Victor, and Henrique will become intertwined in a story of friendship, love, and stigma-a story about hitting what you think is rock bottom, but finding the courage and support to keep moving forward.

Set in Rio de Janeiro, Brazil, this utterly engrossing debut by Brazilian author Lucas Rocha calls back to Alex Sanchez's Rainbow Boys series, bringing attention to how far we've come with HIV, while shining a harsh light on just how far we have yet to go
Posted by Kate Larkindale at 11:00 AM