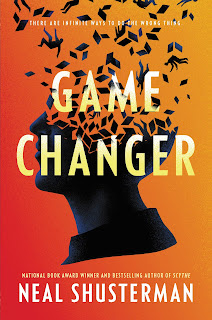 I’m not sure when the idea of the multi-verse captured the world’s imagination, but this year it seems to be everywhere – from the latest Dr Strange film to the utterly bonkers Everything Everywhere All at Once, and now this book, the multi-verse is everywhere.

I’ve enjoyed several of Neil Shusterman’s other books, so I didn’t even read the blurb on this when I saw it at the library, just picked it up and carried it home.  And I’m glad I did.  I’m not much of a multi-verse person, but I enjoyed the various realities Ash found himself traveling through, and more particularly, the ways Ash found himself changed in each new world.  I also liked the way the worlds were linked rather than being completely random, so the changes in one reality were often carried through to the next meaning that Ash’s challenge was to get things back as close to the way they were as possible.

The idea that you can train yourself to pick the right reality also intrigued me.  Ash’s guides through the worlds all seemed to have competing priorities, something that only became apparent once their numbers multiplied along with the worlds.  When you can’t even trust the people who are suppose to guiding you through the universe, what can you do?  Especially as the worlds are becoming increasingly sinister and it looks less and less likely that Ash will be able to affect the changes he wants to affect.

As he slips between versions of the universe, who Ash is begins to change although he maintains his core self and the memories of each reality as he moves from one to the next.  Which I wasn’t 100% sure about – how can the Ash brought up in one world remember his life in a different one as well as holding the memories of this reality.  I think it’s better not to dwell too much on those details or, like time travel, you’ll come up against far too many paradoxes to be able to believe the premise.  Better to just go along with it and enjoy the story without too much analysis.

So I’d recommend this one.  It’s a fun ride with some genuinely suspenseful – and surprising – moments.

But don’t just listen to me!  Here’s the blurb:

All it takes is one hit on the football field, and suddenly Ash’s life doesn’t look quite the way he remembers it.

Impossible though it seems, he’s been hit into another dimension—and keeps on bouncing through worlds that are almost-but-not-really his own.

The changes start small, but they quickly spiral out of control as Ash slides into universes where he has everything he’s ever wanted, universes where society is stuck in the past…universes where he finds himself looking at life through entirely different eyes.
Posted by Kate Larkindale at 11:00 AM