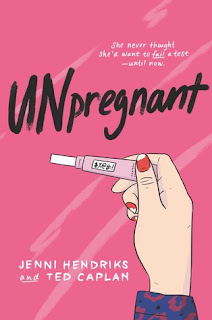 This was a very quick and entertaining read about two ex-friends on a road trip to get an abortion.  It doesn't exactly sound like it would be a laugh, but the situations these girls got themselves into were often hilarious.  Especially with Veronica's douchebag boyfriend in hot pursuit, desperate to stop her from getting to her appointment.

And boy is he a douchebag!  Any guy who fucks with birth control to get a woman pregnant on purpose is not a guy you want to stay with.

Veronica is actually kind of a bitch and I didn't really warm to her until the moment her boyfriend revealed his treachery.  And even after that, there were a lot of moments where she said and did things I thought were extremely selfish.  But by the end of the book she had redeemed herself somewhat and I didn't dislike her nearly as much as I had.

All the time I was reading this, I thought how great it would be as a movie, so it was no surprise when I reached the end, to discover the writers are screenwriters.  The whole book plays out like a comic road movie with a few serious undertones.  And I believe it may be made into a movie at some point too.

It's basically a story about female friendship and over the course of the book Veronica learns how to be a better friend after learning what true loyalty can be.

I'd recommend this one if you're looking for something quick and light that doesn't take too much out of you.  It was kind of exactly what I needed this weekend.

Seventeen-year-old Veronica Clarke never thought she would wish she’d failed a test until she finds herself holding a thick piece of plastic in her hands and staring at two solid pink lines. Even the most consistent use of condoms won’t prevent pregnancy when your boyfriend secretly pokes holes in them to keep you from going out-of-state for college.

Veronica needs an abortion, but the closest place she can legally get one is over nine hundred miles away—and Veronica doesn’t have a car. Too ashamed to ask her friends or family for help, Veronica turns to the one person she believes won’t judge her: Bailey Butler, Jefferson High’s own little black cloud of anger and snark—and Veronica’s ex-best friend. Once on the road, Veronica quickly remembers nothing with Bailey is ever simple and that means two days of stolen cars, shotguns, crazed ex-boyfriends, truck stop strippers with pro-life agendas, and a limo driver named Bob. But the pain and betrayal of their broken friendship can’t be outrun. When their fighting leads to a brutal moment of truth, Bailey abandons Veronica. Now Veronica must risk everything in order to repair the hurt she’s caused
Posted by Kate Larkindale at 2:11 PM