Books I've Read: The Girl Who Came Out of the Woods 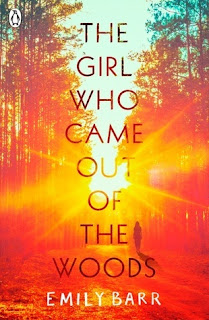 This book sounded fascinating, and in some ways, it was.  In others it was a real disappointment.

It's called a thriller, but it really isn't.  The thriller element is part of a second narrative that runs alongside Arty's story about leaving the idyllic community in which she'd grown up.  I won't say much about it because I'm sure the author meant this part of the book to surprise readers once it becomes clear what is going on in this second story.

Personally, I just found it annoying and confusing, but I can't explain exactly why without giving away the surprise.  Sorry to be vague, but I'd hate to spoil the book for anyone...

Arty is a fascinating character to explore as she discovers the world outside the clearing in which she grew up.  I felt like maybe she adapted to the outside world too easily, that she'd been taught so much about it by the adults in the clearing it wasn't quite as alien and frightening as I imagine it really would have been.

More realistic is Arty's lack of distrust of the people outside.  She has only ever lived with people who are peaceful and loving so doesn't have any understanding of the danger people can present or the kinds of discord that can exist between them.  I would have expected the people in the clearing to have warned her about people on the outside, scared her into being terrified of their worldly ways and their decadent consumerism.  But they clearly didn't, because Arty trusts everyone who speaks to her.

As she moves through this strange new world she's discovering for the first time, she learns about betrayal and distrust for the first time, but still seems to manage to be upbeat and sunny.  There are also some unbelievable coincidences that help her on her journey, but I could almost forgive these because they seemed to work with her character.

Overall, I thought this was a fascinating idea that just wasn't executed as well as it could have been,  Which in many ways is the kind of book that frustrates me the most - so much potential wasted...

A commune hidden from the world. A terrible accident. A lifetime of secrets to uncover. The new YA thriller from Emily Barr.

I've been trapped here for days. What if I die here? I decided to write down my story so that one day, when I'm discovered, they will know who I was and why I was here.

Arty has always lived in the Clearing, a small settlement in the forests of south India. But their happy life, hidden from the rest of the world, is shattered by a terrible accident. For the first time in her sixteen years, Arty must leave the only place she's ever known, into the outside world she's been taught to fear.

Her only goal is to get help from a woman called Tania, who used to live in the forest, and the Uncle she knows is out there, somewhere. As she embarks on the terrifying journey, pursued by an enemy she can't fathom, Arty soon realises that not everyone is to be trusted. She's looking for answers, but what she'll learn from Tania and Uncle Matthew is a shocking truth about her past.

Everything is changing too fast for this girl who came out of the woods, and is she running into a trap...?
Posted by Kate Larkindale at 4:30 AM