Books I've Loved: Even if I Fall 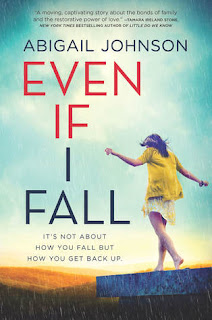 I think Abigail Johnson has become one of my favorite authors.  I've read five of her books now and every one of them has totally kicked me in the feels. She writes characters who are very real and puts them in the most difficult situations, yet somehow they always seem to get through them in the end.

In this one, a girl is dealing with her beloved older brother being in prison for murdering his best friend.  Initially Brooke didn't believe it was possible, but when Jason confessed, it was even worse.  She and her family are now almost entirely isolated from the rest of the people in their small town and unable to move on.

Things change when Brooke runs into the murdered boy's younger brother Heath.  Despite being wary of one another, the pair soon find themselves drawn to meet in secret.  No one else can understand the different, but similar losses each has experienced.  They both know how horrified their families would be if they knew they were meeting, so every one is heightened by this understanding.

When Brooke visits Jason in prison and he says something that leads her to believe he and Calvin were not alone the night they fought, she clutches at this as a way to prove Jason's innocence or at least find out more about what actually happened that night, how the sweet, gentle brother she thought she knew could do something so monstrous.

As she digs deeper into the mystery, she discovers that truth may be more painful that the reality she has been living with since the murder and the collateral damage to those she loves might be devastating.

I loved the way Heath and Brooke's relationship developed.  It felt real and organic and almost inevitable.  Both had such raw, visible pain that came from a shared source.  Only they could understand each other and what they were living through.

I also really liked the different relationships Brooke had with her brother and her younger sister.  It was clear the three siblings were very close, but also that they each had their own relationship with the other.  The sense that that closeness was lost was palpable through the book, as was the pain their parents felt, even as they dealt with it in very different ways.

So, if you're like me and love books that explore the complex dynamics between siblings, families, friends and lovers, this is a definite recommendation from me.

But don't just listen to me.  here's the blurb:

A year ago, Brooke Covington lost everything when her beloved older brother, Jason, confessed to the murder of his best friend, Calvin. Brooke and her family became social pariahs, broken and unable to console one another. Brooke’s only solace remains the ice-skating rink, where she works but no longer lets herself dream about a future skating professionally.

When Brooke encounters Calvin’s younger brother, Heath, on the side of the road and offers him a ride, everything changes. She needs someone to talk to…and so does Heath. No one else understands what it’s like. Her brother, alive but gone; his brother, dead but everywhere. Soon, they’re meeting in secret, despite knowing that both families would be horrified if they found out. In the place of his anger and her guilt, something frighteningly tender begins to develop, drawing them ever closer together.

But when a new secret comes out about the murder, Brooke has to choose whose pain she’s willing to live with—her family’s or Heath’s. Because she can’t heal one without hurting the other.
Posted by Kate Larkindale at 1:15 PM