Books I've Read: Talk To Me 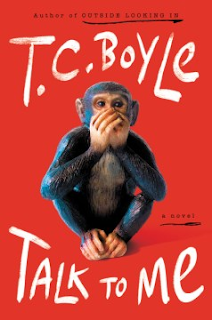 I don't know why I keep reading books about chimps.  They always make me sad in the end...  Something about how human chimps are, and how badly us humans often treat them.

Set in the '70s, this book follows a juvenile chimpanzee called Sam.  Sam doesn't know he's a chimp.  He's been brought up as a human child with a human family.  Guy, the researcher who has raised him,. has recently separated from his wife and is relying on students at the university where he teaches to help care for Sam.

Sam has been taught sign language and Guy is determined to use this grasp of language to find out exactly how chimps might think and feel.  But to keep the research going, he needs to keep funding for the project.  Raising a chimp isn't cheap!

So Sam gets trotted out on talk shows to strut his stuff in the hope that wealthy benefactors might donate.  And one night Aimee, a student at the university, sees one of these appearances and is entranced.  She applies to help care for Sam the next day.

It isn't long before she and Sam are inseparable.  And a little later she begins sleeping with Guy.  It's all happy families until the head of the research project pulls the plug and takes Sam back to his farm in Iowa.

Aimee doesn't think twice before packing her car and going after Sam.  She's as bonded to the chimp as any mother to her child.  But with people this ruthless on her heels, it's not going to be an easy ride...

I loved the way the book interspersed the narrative with chapters from Sam's own point of view.  His distress and fear when locked up is palpable as is his joy when Aimee reappears.  I'm not sure if chimps really think this way, but it feels very plausible for a chimp who was brought up as a human.

What I'm really not sure about is the ethics of bringing a chimp up this way.  I've read several books in which this has happened, and it's always fine while the chimp is young.  As soon as they get older, reach adolescence, things start spiralling out of control.

I find it hard to believe someone as cruel as Montcrief would be in charge of animals and running an animal study, but apart from this broad, villainous characterisation, the other characters were very well drawn - even if they weren't all great people.  I particularly liked the woman who ran the trailer park.  Her decision-making felt all too real.

I'd recommend this one, but with the warning that you may want to keep some tissues handy.  It's thought-provoking, but also very sad.

But don't just listen to me.

From bestselling and award-winning author T.C. Boyle, a lively, thought-provoking novel that asks us what it would be like if we could really talk to the animals

When animal behaviorist Guy Schermerhorn demonstrates on a TV game show that he has taught Sam, his juvenile chimp, to speak in sign language, Aimee Villard, an undergraduate at Guy's university, is so taken with the performance that she applies to become his assistant. A romantic and intellectual attachment soon morphs into an interspecies love triangle that pushes hard at the boundaries of consciousness and the question of what we know and how we know it.

What if it were possible to speak to the members of another species—to converse with them, not just give commands or coach them but to really have an exchange of ideas and a meeting of minds? Did apes have God? Did they have souls? Did they know about death and redemption? About prayer? The economy, rockets, space? Did they miss the jungle? Did they even know what the jungle was? Did they dream? Make wishes? Hope for the future?

These are some the questions T.C. Boyle asks in his wide-ranging and hilarious new novel Talk to Me, exploring what it means to be human, to communicate with another, and to truly know another person—or animal…
Posted by Kate Larkindale at 11:30 AM