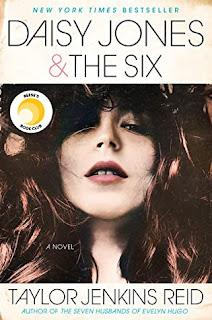 I've been wanting to read this one since I first read about it, but could never find it in the library.  So when I saw it on the shelf at my favourite bookstore on the day I had a birthday book voucher burning a hole in my pocket, I jumped at the chance to buy it.  It sounds like something right up my alley, right?

The subject matter is right up my alley, but I didn't love the way the book is written.  It's in the form of an interview with a variety of people directly and indirectly involved in the story giving their two cents about what happened.

You'd think this would give the story an immediacy - the events are coming out of the mouths of the people who actually experienced them - but this isn't actually the case.  I found I was not that emotionally engaged with any of the characters because they felt a long way from the events.  Which makes sense - the interview is taking place thirty or so years after the period the book is actually about.

Bands and the dynamic between the members is such fertile ground for storytelling.  There is always so much conflict to mine.  And there is certainly that in The Six.  And even more once Daisy Jones joins them and sends them skyrocketing toward stardom.

You know she's going to create tension from the moment she first sings with the group.  She's that kind of woman.  Dangerous, desirable and just a little bit out of control.  And charismatic enough to outshine even the front man of The Six.

It's not a new story or one that hasn't been told (and lived) many times before.  And I kind of wanted it to be.  Even if it was just in the telling.

Unfortunately I didn't get that.  I got a bunch of older people looking back on a period in which they were young with the perspective that comes with age.  They recognise the things they did that were stupid and impulsive and hurt those around them.  They apologise for these things and admit they were the acts of thoughtless young people.

It's still a good story, but I think I would have enjoyed it more if I'd been thrust into the scene alongside the characters, living their experiences warts and all without the hindsight.

A gripping novel about the whirlwind rise of an iconic 1970s rock group and their beautiful lead singer, revealing the mystery behind their infamous break up.

Everyone knows Daisy Jones & The Six, but nobody knows the real reason why they split at the absolute height of their popularity…until now.

Daisy is a girl coming of age in L.A. in the late sixties, sneaking into clubs on the Sunset Strip, sleeping with rock stars, and dreaming of singing at the Whisky a Go-Go. The sex and drugs are thrilling, but it’s the rock and roll she loves most. By the time she’s twenty, her voice is getting noticed, and she has the kind of heedless beauty that makes people do crazy things.

Another band getting noticed is The Six, led by the brooding Billy Dunne. On the eve of their first tour, his girlfriend Camila finds out she’s pregnant, and with the pressure of impending fatherhood and fame, Billy goes a little wild on the road.

Daisy and Billy cross paths when a producer realizes the key to supercharged success is to put the two together. What happens next will become the stuff of legend
Posted by Kate Larkindale at 11:00 AM