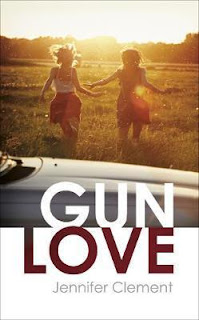 I loved this book from the very first line.  The author is also a poet and I think this shows in the economical yet lyrical way she uses language. It's a short book, but packs a punch in its prosaic look at America's love of guns.

Pearl France is an outsider.  Born to a teenage runaway, she's grown up living in a car on the outskirts of a trailer park in small-town Florida.  Not wanting to get tangled up with the authorities, Pearl and her mother keep largely to themselves.  Margot works and earns enough to keep them in powdered milk, cereal, bug spray and cleaning products and Pearl goes to school.  One of the few residents of the trailer park is a preacher, so they occasionally also go to church.

When the church sets up a scheme where people can hand in their guns ostensibly to put a halt to gun violence, things in the trailer park start to change. Especially when the reverend's friend Eli shows up.

Suddenly Eli is taking up space in Margot's car and Pearl must find other places to go to get away from his overbearing presence.  And his guns which seem to be piling up all over the trailer park.  He even gives one to Margot, to keep her and Pearl safe...

But in this world where guns are as common as mud and people congregate on Sunday afternoons to shoot bullets into the river in the hope of hitting an alligator, it is inevitable that guns will dictate the course of Pearl's life.

This is a beautifully written book that deals with some tough subject matter.  Pearl is an engaging narrator, both naive and world-wise, tough yet fragile. Through her eyes, the world is both brutal and beautiful, even if she doesn't fully recognise either.  Her mother has sheltered her from a lot, only giving her small snippets of her past and the wealthy upbringing she escaped.  So Margot is Pearl's whole world.

Through exploring Pearl's world and those she calls family and friends, this book gives a stark reminder of the pervasiveness of guns and gun violence in America.

It's a short book, and I found it an easy read (and very enjoyable because the author puts words together in such a beautifully lyrical way), but the subject matter is tough enough that I would caution anyone who may be sensitive to violence to think a little before diving in.  It's not particularly graphic, but there are acts of violence on the page, if that is something that might upset you.

Fourteen-year-old Pearl France lives in the front seat of a broken down car and her mother Margot lives in the back. Together they survive on a diet of powdered milk and bug spray, love songs and stolen cigarettes.

Life on the edge of a Florida trailer park is strange enough, but when Pastor Rex’s ‘Guns for God’ programme brings Eli Redmond to town Pearl’s world is upended. Eli pays regular visits to Margot in the back seat, forcing Pearl to find a world beyond the car. Margot is given a gift by Eli, a gun of her own, just like he’s given her flowers. It sits under the driver’s seat, a dark presence…

Gun Love is a hypnotic story of family, community and violence. Told from the perspective of a sharp-eyed teenager, it exposes America’s love affair with firearms and its painful consequences.
Posted by Kate Larkindale at 11:30 AM