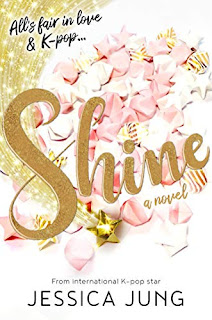 I actually read the sequel to this one a few weeks back without knowing it was a sequel until after I'd started it.  So I was pleased to find the first book in the series so I could find out the back story to what happened in the sequel.

Now, let me make it clear.  I know nothing much about K-pop. I've never listened to it and don't really expect to in the future.  It's not really my jam.  But I've now read several books set in the K-pop world and there is something strangely fascinating about it.

This book (and the sequel, Bright) are written by a K-pop star and reading her bio in the back of the book, it's pretty clear the novels are based, at least loosely, on her own experiences.  Which is pretty horrifying if (and I believe they probably are) the stories told in the book are true.

At just 11 Rachel began her training to be a K-pop star with the powerful label DB, known for churning out hit after hit.  The competition is fierce and Rachel has a disadvantage in that her mother won't allow her to live on the DB campus and train full time.  She has to fit her training in around school and living at home while the other girls live on campus and train full time.

Yet even with this disadvantage, Rachel manages to shine.  She has a great voice and that goes a long way toward overshadowing the fact she's incredibly awkward and shy in front of cameras and sometimes struggles with dance moves.  In the competitive environment of K-pop, any weakness is likely to be exploited by other trainees clawing their way to the top and Rachel is no exception.

When the opportunity arises to perform with one of the most popular singers in a K-pop boy band, the competition becomes cut-throat and Rachel finds herself needing to resort to her own subterfuge to ensure she gets seen the way she wants to be seen.

But things get complicated when she realizes she doesn't just like singing with Jason Lee.  She actually likes Jason as a person.  Maybe more than likes.  But she can't do anything to act on this because K-pop singers aren't allowed to date.  One kiss caught on camera has been known to end a career and Rachel can't risk losing her chance when she's worked so hard to get to this point and may even get put into a group to debut this year if things go well.

I enjoyed this insight into the world of K-pop.  Like ballet, it's super competitive with rules that make very little sense and are designed to keep people from being too individual and standing out from the crowd.  Independence is discouraged and anyone who dares to deviate from the company line is likely to find themselves cut from the programme and never given a chance to perform again.

It's not a work of high art, but it's readable and compelling enough to keep you turning the pages if just to see how awful ambitious people can be to each other.

A Korean American teen is thrust into the competitive, technicolor world of K-pop, from Jessica Jung, K-pop legend and former lead singer of Girls Generation.

What would you give for a chance to live your dreams?

For seventeen-year-old Korean American Rachel Kim, the answer is almost everything. Six years ago, she was recruited by DB Entertainment—one of Seoul’s largest K-pop labels, known for churning out some of the world’s most popular stars. The rules are simple: Train 24/7. Be perfect. Don’t date. Easy right?

Not so much. As the dark scandals of an industry bent on controlling and commodifying beautiful girls begin to bubble up, Rachel wonders if she’s strong enough to be a winner, or if she’ll end up crushed… Especially when she begins to develop feelings for K-pop star and DB golden boy Jason Lee. It’s not just that he’s charming, sexy, and ridiculously talented. He’s also the first person who really understands how badly she wants her star to rise.
Posted by Kate Larkindale at 11:28 AM