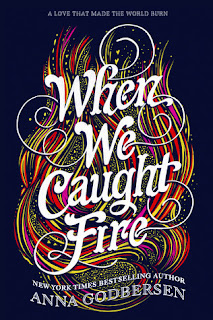 I somehow seem to keep picking up historical fiction at the library, which is weird because it's not really my go-to genre.
This one is set against the backdrop of the fire that destroyed a large part of Chicago in 1871 and revolves around a messy love triangle (or love square, really since there are four central characters involved).
Emmeline is about to be married to a wealthy and eligible bachelor and is quickly becoming the talk of the town.  Not an old money family, Emmeline is new on the social scene thanks to her father's sudden rise in fortune and is therefore something of a curiosity around town.
Emmeline's best friend from the old neighborhood has come with Emmeline and her father to the other side of town and is now employed as Emmeline's maid.  Emmeline keeps forgetting that Fiona is now a servant and keeps slipping into treating her as the bosom buddy she's been most of their lives.
Back in the old neighborhood, the pair's other friend, Anders, has been left behind.  He's been in love with Emmeline as long as he can remember and had always assumed that they would marry when they were old enough.  So the discovery that she is betrothed to another is a shock to him, one that wounds him deeply.  Especially since he had to read the news in the paper.
Emmeline realizes she's treated Anders poorly and is determined to speak to him herself.  On the eve of her wedding she and Fiona sneak out to see him fight in a boxing match at the local tavern.  Unable to let his best friends see him lose, Anders wins the fight, invoking the fury of the gambling community which expected him to lose.
As Fiona and Emmeline struggle to hide him from these bad men, Emmeline realizes she still loves Anders and hatches an elaborate plan to escape her upcoming wedding and run away with Anders.  Fiona, who also harbours feelings for Anders is supposed to help the pair flee to New York, but everything changes as the summer nights heat up and buildings across the city start to burn.
I found Emmeline to be an incredibly selfish character, one of those people so used to being adored and getting her own way that she doesn't even recognize her privilege and takes it entirely for granted.  I felt for Fiona who had lived her whole life in Emmeline's shadow, and for Anders who is perhaps a little simple and quite willing to follow the lead of both his strong-willed female friends.
The fire in Chicago is an event I knew about, but only in the vaguest of ways, so this book vividly brought the events leading to the fires and its devastating effect on the city to life.  I just wish the characters we followed through the fire were people I cared more about because other than poor, simple Andres, I really didn't like any of the main protagonists enough to care much if they survived or not.
But if you like historical fiction and enjoy reading about lives lived in another century, this one offers a perspective on the class system and its inequities even before the fire rips through the city.
But don't just listen to me.  Here's the blurb:
It’s 1871 and Emmeline Carter is poised to take Chicago’s high society by storm. Between her father’s sudden rise to wealth, and her recent engagement to Chicago’s most eligible bachelor, Emmeline has it all. But she can’t stop thinking about the life she left behind, including her childhood sweetheart, Anders Magnuson. Fiona Byrne, Emmeline’s childhood best friend, is delighted by her friend’s sudden rise to prominence, especially since it means Fiona is free to pursue Anders herself. But when Emmeline risks everything for one final fling with Anders, Fiona feels completely betrayed.

As the summer turns to fall, the city is at a tipping point: friendships are tested, hearts are broken, and the tiniest spark might set everything ablaze. Sweeping, soapy, and romantic, this is a story about an epic love triangle—one that will literally set the city ablaze, and change the lives of three childhood friends forever.
Posted by Kate Larkindale at 10:00 AM