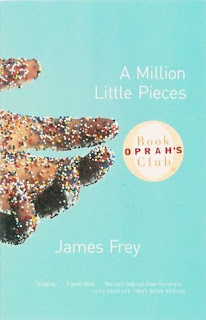 When I picked this one up from our whare kai (lunchroom) library, I knew I'd heard of it, but couldn't remember why or in what context.  So I read the the whole thing before realizing that this is the "memoir" that everyone dumped on because the author apparently made some stuff up and embellished other parts of it.

Now, I don't really care how much is true and how much isn't.  I don't believe memoirs have to be 100% factual.  Everyone has slightly different memories about past events and what I believe is the truth about something may not ring true to someone else who was there.  And to write a compelling story, sometimes you need to skip things or merge events or even potentially make something up to connect two points in time.

Now, as for the book I read.  I didn't love it.  I found the writing challenging in places because the author doesn't use standard punctuation, especially around dialogue, so it was often hard to know who was speaking, especially when there was more than two people in a conversation.  And he randomly capitalises some words which was just weird and unnecessary.

It's not an uplifting read either.  Addiction rarely is and addicts tend to be incredibly self-centered and lacking in empathy for others.  James is no different and his refusal to buy into the treatment plan offered to him made an already unlikable character even less likable.  I kind of wanted to slap him and tell him that if he wasn't willing to do the work, he should leave and let someone else who was ready to work take his place.

The whole book basically takes place at the treatment center and it isn't a short book.  It's a long time to spend with a rather unlikable dude and his fellow addicts.  I almost gave up on the whole book after an extended description of James's root canal without any anaesthetic.

But I read on because I was just intrigued enough to want to know more.  And because I'm stubborn and very rarely give up on a book, even if I'm not loving it.  Plus, I hadn't had time to go to the library and nothing else to read.

It's not a great book by any stretch of the imagination, but it is somehow compelling.  Even though I never liked James, I did find myself rooting for him to succeed.  At the end of the book whoever had left the book in our library had stuck a helpful sticky note on the last page of the actual story warning not to read on because there's a whole bunch of stuff after the ending that tells you what happened to the characters in the book post-rehab.  I read on (stubborn, remember? No sticky note tells me what to do) and now I don't need to read the follow-up book because I know what's going to happen.

So would I recommend this one?  Probably not.  But not because it's a fabricated memoir, but because it's just not that great a read.  But if you're interested in addiction and recovery, maybe it will offer you something different.

At the age of 23, James Frey woke up on a plane to find his front teeth knocked out and his nose broken. He had no idea where the plane was headed nor any recollection of the past two weeks. An alcoholic for ten years and a crack addict for three, he checked into a treatment facility shortly after landing. There he was told he could either stop using or die before he reached age 24. This is Frey’s acclaimed account of his six weeks in rehab.
Intense, unpredictable, and instantly engaging, this is a story of drug and alcohol abuse and rehabilitation as it has never been told before. It is also the introduction of a bold and talented literary voice.
Posted by Kate Larkindale at 11:10 AM