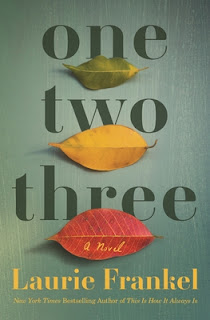 I picked this one up because I enjoyed Laurie Frankel's pervious book and this sounded interesting.
It's set in Bourne,  a town that was destroyed by an environmental disaster many years ago.  It has left the population severely damaged, physically and spiritually.  Those that didn't die are often maimed or ill and those that have been born since the disaster tend to be damaged due to the ongoing pollution in the town's water.
Three of those are the Mitchell triplets who narrate this story chapter by chapter.  Mab is the least damaged of the three and the one everyone sees as having all the chances.  She studies hard and is both desperate to leave Bourne and terrified to do so.
Monday sits somewhere on the autistic spectrum and has to have things a certain way.  She will only wear yellow and eat yellow food unless it's raining in which case she will wear and eat green.  Since the library closed, she acts as the town librarian and has an uncanny knack of finding exactly what people need.
Mirabelle is a genius and everyone knows it even though she is confined to a wheelchair and unable to speak.  Some days she can be relatively independent, but mostly she has to rely on her mother and sisters to deal with her basic needs.
The triplets' mother works two jobs and sends all her spare time trying to hold the company responsible for the disaster to task through a law suit that has been dragging on for far too many years.
When a moving van shows up in town, not to move someone out, but to move someone in, the entire town is intrigued, but none more so than the Mitchell triplets.  As they learn the identity of the new arrivals and begin to understand why they have suddenly appeared in town, dark secrets and old hurts are uncovered.  And the more they learn, the more devastating the result will be if these new arrivals are allowed to do what they have planned to do.
But these newcomers didn't count on the power of three...
I enjoyed the different voices telling the story here.  Each of the triplets has a distinct personality, tone and view of the world and each plays an essential part in stopping the rape and devastation of their town again.  I fear there are towns just like Bourne, left to wither by companies that have stripped everything they can from the community and then left them to die alone or to keep scratching out an existence from the ashes.
Somehow for me, the story never quite came together or gelled the way it should.  I didn't feel satisfied at the end the way I feel like I should have.  I can't even tell you why.
So I recommend this one with some reservations.  It's not a super easy read and tonally it's all over the place - tragic, hilarious, maudlin.  But the voices are compelling and the characters are ones that will stick with you after you've finished.
But don't just listen to me.  Here's the blurb:
In a town where nothing ever changes, suddenly everything does...
Everyone knows everyone in the tiny town of Bourne, but the Mitchell triplets are especially beloved. Mirabel is the smartest person anyone knows, and no one doubts it just because she can’t speak. Monday is the town’s purveyor of books now that the library’s closed―tell her the book you think you want, and she’ll pull the one you actually do from the microwave or her sock drawer. Mab’s job is hardest of all: get good grades, get into college, get out of Bourne.

For a few weeks seventeen years ago, Bourne was national news when its water turned green. The girls have come of age watching their mother’s endless fight for justice. But just when it seems life might go on the same forever, the first moving truck anyone’s seen in years pulls up and unloads new residents and old secrets. Soon, the Mitchell sisters are taking on a system stacked against them and uncovering mysteries buried longer than they’ve been alive. Because it's hard to let go of the past when the past won't let go of you.

Three unforgettable narrators join together here to tell a spellbinding story with wit, wonder, and deep affection. As she did in This Is How It Always Is, Laurie Frankel has written a laugh-out-loud-on-one-page-grab-a-tissue-the-next novel, as only she can, about how expanding our notions of normal makes the world a better place for everyone and how when days are darkest, it’s our daughters who will save us all.
Posted by Kate Larkindale at 11:22 AM