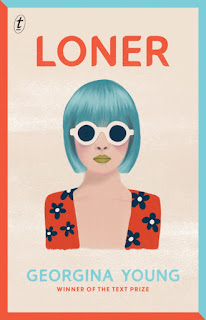 This was an interesting book and one I enjoyed very much for a number of reasons.  It's not quite YA in that the characters are out of high school and, for the most part, in college or dropping out of college.  Yet these characters are just as awkward and unsure of themselves as any YA characters.

Lona has dropped out of art school and is now drifting.  She still lives at home with her parents, but things are getting crowded now her grief-stricken and confused grandfather has also moved in.  Lona has always loved her grandfather, but she doesn't understand the man who has moved into her brother's bedroom.

So when the opportunity to move into a flat presents itself, Lona takes it, despite being both anti-social and socially awkward.  Living outside the family home gives her the freedom to explore new things, like the weird boy she might just be falling in love with.

The realities of this time of life play out in painful starkness in this book, from trying to cram in enough jobs to cover rent, to the strain new relationships have on friendships you thought might last forever.  All the characters in this book are struggling to figure out how to be an adult and how to maintain adult relationships.  Lona's isolation is patly self-imposed.  She genuinely seems happier in her own company than in the company of others, yet she needs other people as much as we all do.

While she is striving to be an adult, Lona still clings to things from her childhood which is why she still works part time at the roller rink she's enjoyed going to since she first met her best friend whose family owns the place.  And the rink is the only place Lona seems to really relax and be herself.  Even her art, something she has always believed she is good at, is suffering as she struggles to figure out what she is trying to say with her creations.

Set in Melbourne, a city I lived in for several years and know well, the book is written in very short chapters that don't always flow on directly from each other, but just touch on the parts of Lona's life that are actually worth looking at.

I would recommend this one.  It's a very well drawn insight into that twilight world between adolescence and adulthood where neither seems to fit well, and life is confusing, difficult and yet somehow still quite wonderful.

Lona, a cynical, introverted artist and part-time roller-DJ, traverses life’s sorrows and joys in this heartfelt look at new adulthood.

Set in Melbourne, Loner is a humorous and heartfelt exploration of new adulthood. Lona kills her days by sneaking into the dark room at her old art school to develop photographs. She kills her nights DJ-ing the roller disco at Planet Skate. She is in inexplicably, debilitatingly love with a bespectacled Doctor Who-obsessed former classmate, and in comfortable, platonic love with her best friend Tab. Lona works hard to portray a permanent attitude of cynicism and ennui but will her carefully constructed persona be enough to protect her from the inevitable sorrows and unexpected joys of adult life? Loner re-examines notions of social isolation experienced by young people, suggesting sometimes our own company can be a choice and not a failing.
Posted by Kate Larkindale at 11:16 AM