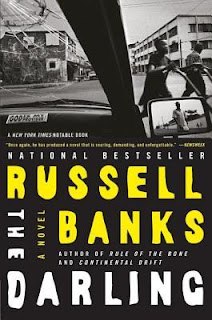 I've long been a fan of Russell Banks so it was a nice surprise to find a book of his that I hadn't yet read when I went to the library last week.

Based on real events, The Darling follows Hannah Musgrave (AKA Dawn Carrington) through two decades as she escapes the US where she is wanted for her political activities with the Weather Underground and makes a new life for herself in Liberia.

I knew very little about the history of Liberia, so I found this book fascinating in that regard, but I did find Hannah to be a very difficult main character to like.  She's a very cold woman, perhaps because she learned to supress her emotions to be able to do the work she had to do as a political radical.  She has more compassion for the chimpanzees she looks after in Liberia than she does for her own family.

The books jumps around in time quite a bit, starting in the 1990s when Hannah has returned to the States and is living a quiet life on a farm in upstate New York.  It's a place we return to several times, even as Hannah travels back to Liberia in search of the sons she left behind in the war-torn African nation and becomes mired in memories of the past.

We see her life in the 1970s, pre-Liberia as she lives in hiding from the US Government, still contributing to the radical political causes she has been devoted to since her college days.  We see her arrival in Africa and eventual drift into Liberia where it is not long before she meets Woodrow, the low-level government official she eventually marries.

Hannah's introduction to Woodrow's family in a remote village does not go well, and is perhaps a hint at what the marriage will be like.  Woodrow is not faithful, either to his wife, or to the president he purports to work for.

Charles Taylor, the man who will set Liberia's bloody revolution in motion is present as part of Woodrow and Hannah's social circle from the start, but it is not until well into the book that his true colours begin to show.  And by then, his life and Hannah's are, intrinsically, if superficially linked, and with them, the fate of Liberia and its people.

I found this book fascinating, even though I can't say I particularly enjoyed a lot of it.  Hannah's lack of emotional engagement with the people around her made it difficult to empathise with even the most horrific things she experiences.  Yet she is not objective in her coldness to what unfolds, which made reading her account challenging.  I have never experienced a narrator like this, which is again, interesting, even if I didn't particularly enjoy the approach.

But if you are at all interested in Liberia and its recent history, this gives a pretty good insight into what happened there.  It's not a bad book by any means - it's well written and the characters remain consistent throughout - it's more that I just didn't enjoy spending the length of the novel with the narrator.  It might just be me...

Set in Liberia and the United States from 1975 through 1991, The Darling is the story of Hannah Musgrave, a political radical and member of the Weather Underground.

Hannah flees America for West Africa, where she and her Liberian husband become friends of the notorious warlord and ex-president, Charles Taylor. Hannah's encounter with Taylor ultimately triggers a series of events whose momentum catches Hannah's family in its grip and forces her to make a heartrending choice.
Posted by Kate Larkindale at 11:30 AM