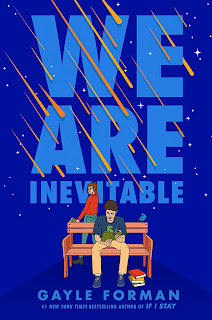 This book was an absolute joy for someone who loves books and reading as much as I do.  I devoured the whole thing between waking up on Sunday and lunch.
Aaron Stein and his father Ira run a bookstore in a small town outside of Seattle.  A family tragedy has left his father barely able to cope so the store has been signed into Aaron's name.  But Aaron doesn't really want it. He hasn't even read a book since the tragedy which sent his mother running from the family and his father spiralling into panic attacks.
A broken bookshelf and the discovery of just how much debt the store is actually in send Aaron over the edge and he decides to sell the store.  He just can't quite tell Ira.  Yet.
When a chance encounter with an old school acquaintance leads to an unexpected friendship, and meeting Hannah, the girl who might just be perfect for him, Aaron's life changes.  So does his outlook which has always been gloomy.  Suddenly things are looking up and for the first time in a long time, Aaron starts feeling hopeful about the future.  Even the future of the store.
But unless he can find the money to buy back the store, there isn't a future for it and when everyone around him finds out what he's done, the hope he was beginning to harbour crashes around him.
I loved this book.  Aaron's troubles felt to real to me, and so insurmountable.  No one should be dealing with so much at nineteen, and it's no wonder Aaron feels overwhelmed by the responsibility.  Yet once the tragedy his family has faced is revealed, it's completely understandable how and why he's wound up in this position.
The supporting characters are delightful, even if they are drawn with a pretty broad brush.  They are enough to re-instate your faith in the inherent goodness of people.
If you're looking for a quick, fun read that will leave you with a smile on your face, I would recommend this one.  It's not exactly a romp, but there's certainly a lot of humour in there and it certainly put a smile on my face!
But don't just listen to me.  Here's the blurb:
'I got this whole-body feeling... it was like a message from future me to present me, telling me that in some way we weren’t just bound to happen, that we had, in some sense, already happened. It felt... inevitable.'

So far, the inevitable hasn’t worked out so well for Aaron Stein.

While his friends have gone to college and moved on with their lives, Aaron’s been left behind in the Cascade Mountains of Washington State, running a failing bookshop with his dad, Ira. What he needs is a lucky break, the good kind of inevitable.

And then he meets Hannah. Incredible Hannah – magical, musical, brave and clever. Could she be the answer? And could they – their relationship, their meeting – possibly be the inevitable Aaron’s been waiting for?
Posted by Kate Larkindale at 11:30 AM